GR Yaris – forged in the heat of World Rally competition 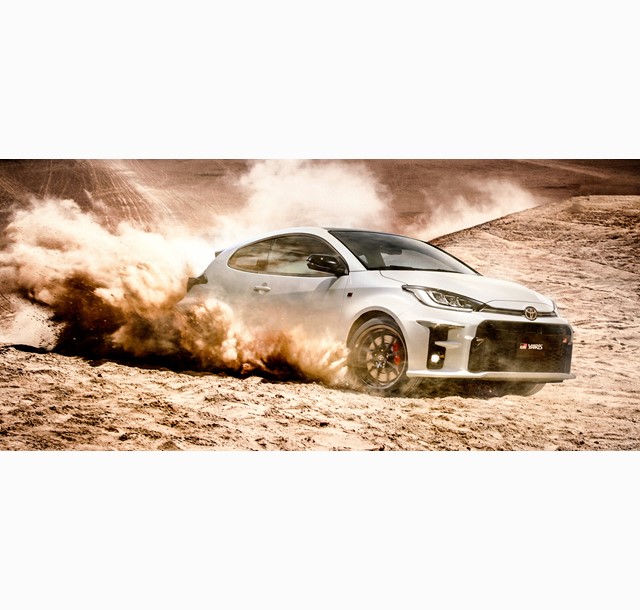 Born of Toyota’s rallying performance and built to exacting standards by Toyota master craftsmen in Japan, the GR Yaris is the epitome of Toyota’s dedication to make exciting cars that are truly fun to drive.

Positioned at the top of the Yaris range, the GR Yaris is a unique model that benefited from the design and engineering skills of Toyota GAZOO Racing and its WRC partner, Tommi Mäkinen Racing. As well as being based on the WRC GR Yaris it also has all the attributes required for owners looking to compete successfully in local rally competitions.

The new GR Yaris is the first every-day production car to be reverse engineered by Toyota from a pure motorsport car. The GR Yaris follows the GR Supra as Toyota’s second global GR model.
Toyota New Zealand Chief Executive Officer Neeraj Lala says the input of TOYOTA GAZOO Racing into the GR Yaris, has ultimately resulted in a car that is high octane fun.

“While every aspect of the GR Yaris is exhilaratingly performance focused; the car is just as happy on a daily commute. The GR Yaris is made to thrill at every turn.”
“The addition of the GR Yaris will be one of the best hot hatches on the market, in fact it’s more than a hot hatch it’s a pure bred, rally inspired car,” Neeraj says.

“This will be a car that is coveted by car enthusiasts in years to come. I can see customers in 10 years’ time wishing they had this iconic hatch in their garage.”
“The GR Yaris combines World Rally performance breeding with the ease, comfort and safety technology Toyota is known for. This is going to be a car that everyone wants to own!”
High performing, yet lightweight engine

At the heart of the GR Yaris is a newly developed inline three-cylinder 1.6L turbocharged engine that benefits from motorsport technology to maximise performance, including multi-oil jet piston cooling, large diameter exhaust valves and a part-machined intake port. Displacing 1,618cc, it produces a maximum 200kW and 370Nm of torque.

Power-to-weight ratios are key to extracting high performance from small displacement engines. As a result of using carbon fibre for the roof and aluminium for the bonnet, door and
tailgate body panels, the GR Yaris has a ratio of 6.4kg per kilowatt. The GR Yaris can hit 100km/h in just 5.2 seconds.

The engine is connected to a GR-FOUR permanent all-wheel drive system to achieve a high level of dynamic performance. The system utilises several drive modes which change the front: rear torque distribution between Normal 60:40, Sport 30:70 and 50:50 in Track mode.

GR Yaris takes its design cues from the 2020 Yaris and ratchets up the hot hatch look by losing two rear doors and lowering the height by 55mm to create a coupe silhouette. At the front, the grille design, imposing air intakes, and spoiler emphasise the car’s GR status, while at the rear a wide tread and muscular wings accommodate 18-inch BBS forged alloy wheels, fitted with 225/40ZR18 Michelin Pilot Sport 4S tyres. Red painted front and rear brake callipers are branded with the GR logo.

The GR Yaris is available in four exterior colours: Frosted White and Glacier White which create an eye-catching contrast against the black carbon fibre roof; and Emotional Red and Jet Black.
Interior features

Although GR Yaris buyers will primarily be motivated by the performance and engineering of the car, its interior design has been upgraded from the standard Yaris hatch to align with its rally sports pedigree.

The interior features a GR-branded heated leather steering wheel, aluminium pedals, Ultrasuede® and synthetic leather front sports seats with contrast stitching and heaters. The two rear seats are covered in synthetic leather. They are also 60:40 split folding and able to fold down to make a flat floor.

For the driver, there is a 4.2-inch colour multi-information display including a turbo boost pressure gauge, head up display, dual zone air conditioning and auto dimming rear view mirror.
For audio entertainment, an 8-speaker JBL premium audio system is controlled via a 7-inch touchscreen, which includes Satellite Navigation, Apple CarPlay® and Android Auto™.

GR Yaris is the second Toyota to feature Emergency Steering Assist which supports the driver when there is a possible collision risk with a pedestrian or obstacle in the car's lane of traffic and they must swerve to avoid an impact. The system provides additional steering torque to enhance vehicle stability and prevent the car from leaving its traffic lane.

To build the GR Yaris, Toyota invested in a new production line at its Motomachi factory. Instead of a conveyor assembly line, the high-tech line consists of multiple cells to enable highly precise assembly work. Toyota brought in highly skilled Takumi (master craftsperson) from across its manufacturing facilities to build its GR sports cars.

Rather than mass production, the GR Factory focuses on multiple-model low-volume production.

Each GR Yaris engine is built by master craftspeople one at a time, with precise three-dimensional measurements made throughout the process. Numerous measurements and tests are done during the full assembly to ensure the final vehicle is as close as possible to target specifications. Finally, each GR Yaris is put through its paces on a purpose-built course by a professional driver.

Toyota New Zealand has secured initial limited stock of the GR Yaris. However, Toyota is taking firm orders for the exciting hot hatch through its Toyota stores.
Drive Away Price