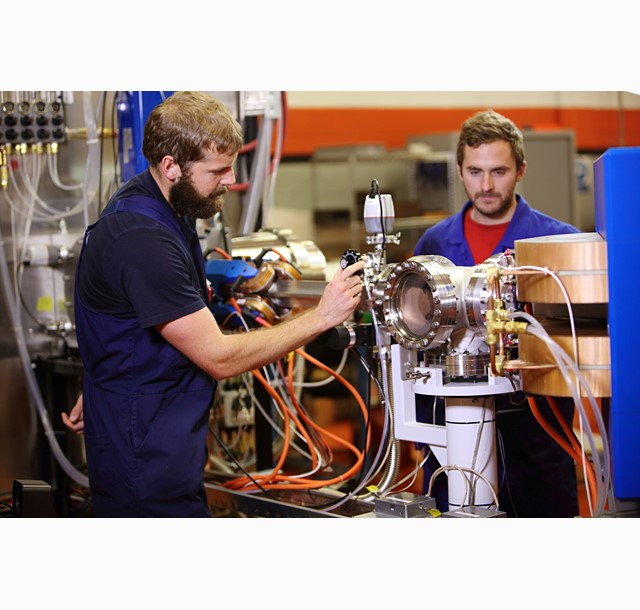 Melanson has spent the last 18 months at Buckley Systems, the precision electromagnets developer and manufacturer, carrying out research from which he will be writing his thesis.

He has been using an Ion Source Test Facility initially developed by British Columbia based, D-Pace, which is 50 per cent owned by Buckley Systems.

Melanson helped assemble the ISTF at Buckley Systems' premises in late 2015 and is now using it for his research.

While creating negative carbon ions may seem a mystery to most of us, Dr. Morgan Dehnel, the President of D-Pace and Buckley Systems' Chief Science and Innovation Officer knows it will have a practical application.

"When we create a negative carbon beam somebody will buy the technology used to produce it."

The negative or positive carbon ion beams that are being developed in the ISTF by PhD students are of use in ion implanters in the semiconductor industry for making computer chips, said Dr. Dehnel.

A road trip across Canada to go skiing in the Rockies brought him to Nelson, 650 kms east of Vancouver, where D-Pace is based. Melanson had a scholarship to do a Doctorate and when he discovered what D-Pace was involved in he decided to stay.

"D-Pace was a change. Its work has a hands-on approach with more engineering involved," said Melanson. "It's more real world physics."

The University of British Columbia is peer reviewing Melanson's work on an annual basis. He has already published papers on what he has achieved in his research so far.

Dr. Dehnel says Melanson's study is a great example of fostering the connection between business and the academic community.

"Everything he is doing is original research," said Dr Dehnel. "It's expanding our knowledge base."

And providing a research facility for PhD students helps provide possible employees for the future.

Producing a negative carbon ion source requires a combination of factors including experimentation, according to Melanson.

"The fun part is working out what goes wrong and fixing it."

He has had to figure out all the wiring and computer controls for the beam accelerator and associated equipment to produce the carbon negative ions.

Buckley Systems manufactured and paid for the ISTF as well as providing the large magnet which separates the beam with its magnetic field. The company is actively assisting Stephane with his research modifications and improvements.

The carbon is sourced from acetylene gas in a vacuum. High power radio waves produce charged particles to get the ion source.

In the future, the ISTF will be used for different experiments and research by other PhD students, producing new particles in different ways with perhaps hydrogen as a source as one example.

Anand George from the University of Auckland will be the next student to use the ISTF for doctorate study with the aid of a fellowship grant of $90,000 from Callaghan Innovation for three years.

He will work under the academic supervision of Dr. Neil Broderick from the University and Dr. Dehnel as the industrial supervisor.