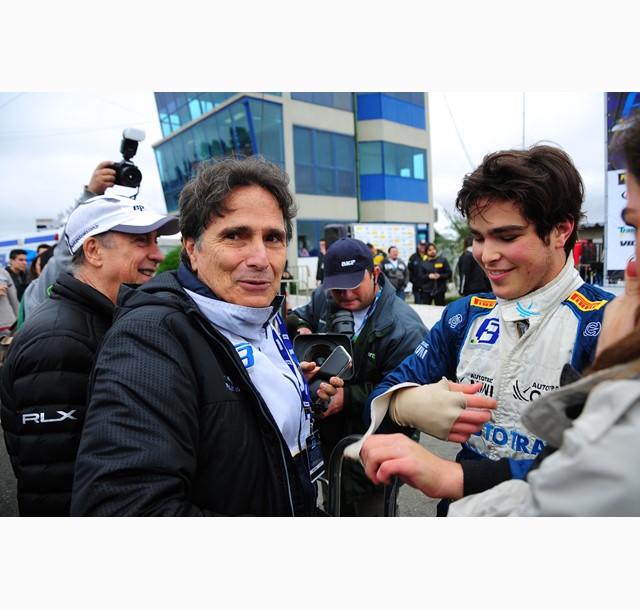 The 17 year old is in New Zealand competing in the Toyota Racing Series, and dad, the triple Formula One World Champion in 1981, '83 and '87, Nelson Piquet is here to watch over his efforts.

"The name won't do it," said Piquet junior. "I've got to prove myself on the track."

Pedro had a mixed bag of results at Ruapuna last weekend at the first weekend of the five round, 15 race series, racing with the number 5 his father used for much of his Formula 1 career.

Pedro started the first race of the series on Saturday from tenth on the grid, improving to a seventh place finish.

With the top eight places being reversed for Sunday morning's race that put him second on the grid. Pedro took the lead from the outset, which he held until three laps from the finish, when he slid wide on a damp track and allowed English teenager Lando Norris to come through and take the win.

In the Lady Wigram Trophy race, the main event of the weekend, Piquet made a strong start from fourth and was second after the first corner, but then spun on the last corner of the first lap. That prompted his team to call him into the pits and change to wet tyres as the damp track became increasingly slippery.

When the safety car was called out while other stricken cars were moved from dangerous positions where they had slid off, it appeared Piquet's team's gamble had paid off. He was the leading driver on wet weather tyres which were five seconds a lap faster and he was right behind those drivers still on slick dry weather tyres.

But once the race restarted Pedro was involved in an incident with the slower cars he was trying to overtake, spun off and didn't finish the race.

Nelson's reaction was instantaneous, throwing up his hands in frustration, as Jehan Daruvala, who was behind Pedro, avoided the incident and went on to win.

"The boy has to learn" said Nelson. "Europe will be like this. He hasn't had much wet weather driving at home."

But results are not all important at this stage of Pedro's career according to his father.  "It's getting the mileage in the car. Time will tell how far he goes in the sport and if he gets to Formula 1."

And if Pedro ends up with a career in a different class of racing like his older brother Nelson Junior who became a victim of Formula 1 politics and now races in the Formula E championship, it will not be all bad. "It's still a great sport where you learn to work in a team for success. The experience will be good for other situations in life," said Nelson.

He concedes it is difficult for his sons to follow in his footsteps. "I was basically a mechanic and the cars back then required much more practical knowledge. There were no electronics like today. The F1 cars are easier to drive now."

Pedro appreciates his father's support. "Maybe my sponsors get a bit more attention because of the name, but I've still got to perform."

"All the things Dad went through are happening to me now, but he can help me deal with it."

Piquet junior wants to make the most of the Toyota Racing Series as he heads for the second round at Teretonga this weekend. He is currently seventh on the points table.

"It's very good training for the year," said Piquet. "We do like a whole season in five weeks, with practice, qualifying and 15 races to get better at race craft."

All the drivers Piquet and the other 15 internationals here for the Toyota Racing Series will face when the northern hemisphere season starts are currently doing nothing, while their rivals are getting valuable experience at the bottom of the world.