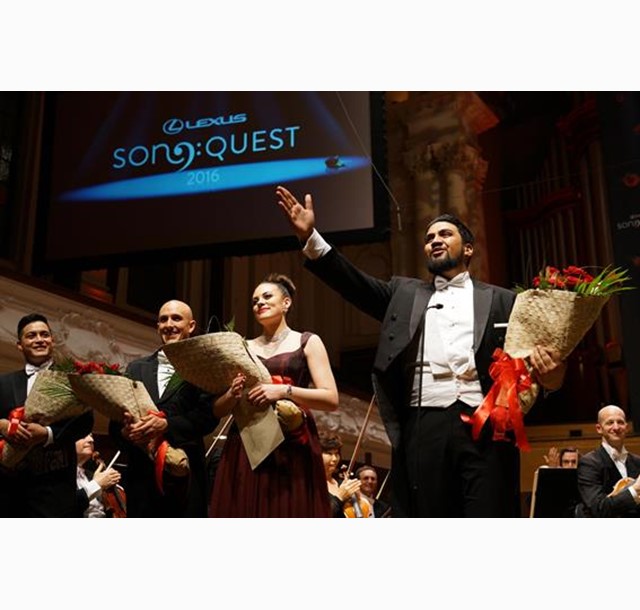 The Baritone won the bi-annual contest from tenor and fellow Aucklander Filipe Manu.

Wilson follows in the footsteps of Dames Kiri Te Kanawa and Malvina Major, who won the Song Quest on their way to stellar international careers.

The competition was in its 60th year this year and more recent winners have included Jonathon Lemalu and Amitai Pati.

Wilson said he was "blessed to receive this honor and was ready to step up to the challenge." He will use the study scholarship, at an institution yet to be decided, in Europe or possibly North America.

What complicates his choice is a prize he won at an Australian competition last year, allowing him to study at the Guildhall School of Music and Drama in London.

Wilson's voice was discovered when his family shifted to Havelock North in the Hawkes Bay when he was the only Samoan in the school choir. "Back in Onehunga everybody I sang with had great voices," said Wilson.

On his way to success in the Lexus Song Quest, Wilson completed a Bachelor of Music degree with Honours at Auckland University in 2014 and since then has pursued his musical ambitions.

The finalists each performed four songs in front of a packed Town Hall without the aid of any amplification. Two secular songs were accompanied by pianist Terence Dennis and two arias with backing from the New Zealand Symphony Orchestra, conducted by Edo de Waart.

Acclaimed soprano and International Lexus Song Quest Judge Yvonne Kenny said she had been impressed by all four "outstanding" finalists and that New Zealand could be "proud that the fine tradition of beautiful voices and refined singing continues."

Runner-up Manu received an immediate cash prize of $8,000 supported by the Dame Malvina Major Foundation, and a Study Scholarship of $10,000.

The third and fourth place-getters, Hamilton soprano Madison Nonoa, and Auckland's Bass Baritone Tavis Gravatt each received an immediate cash prize of $3,500 net. Nonoa also received the $15,000 Kiri Te Kanawa Foundation scholarship 'for the singer who shows the most promise'

"Lexus is thrilled to continue to support such talented young New Zealanders," said Andrew Davis, the Lexus General Manager of Marketing. "The Grand Final showcased four unique voices and characters, and Ms Kenny had an unenviable task in deciding the overall winner."