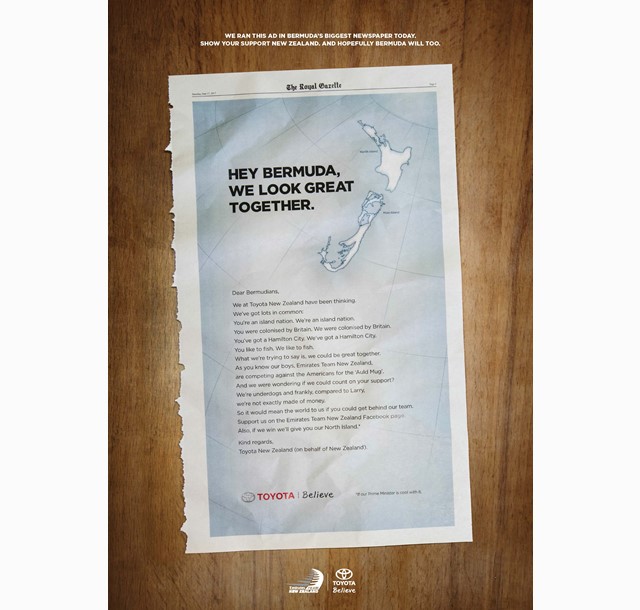 A campaign launched in the Caribbean island nation's media, draws many parallels between Bermuda and New Zealand under the heading, "Hey Bermuda we look great together," and then cuts to the chase.

"We're wondering if we can count on your support? We're underdogs and frankly compared to Larry (Larry Ellison, the billionaire funder of defenders Oracle) we're not exactly made of money."

The campaign notes that both Bermuda and New Zealand are island nations originally colonised by Britain, with a liking for fishing and that both happen to have a city called Hamilton

It also suggests that if Emirates Team New Zealand wins the "Auld Mug" we will give Bermuda the North Island, subject to Prime Minister Bill English being "cool with it."

Toyota Ambassador, Marc Ellis, also lends a hand with an impassioned video message to the people of Bermuda.

"The exciting, action packed racing of the 2017 America's Cup has New Zealanders on the edge of their seats," said Andrew Davis, the General Manager of Marketing for Toyota New Zealand.

"We know New Zealand is behind the team. We thought it would be fun to recruit the support of Bermuda too."

"This month's racing in Bermuda is the seventh America's Cup campaign Toyota has been involved in."

"This year's campaign aligns even more closely with our brand values of continuous improvement and over the last four years this focus has led to some exciting innovations."

"The team has achieved remarkable success in a short time driven by imagination, experimentation and innovation - like the cyclors - and it is the people who have gone the extra mile to deliver an outstanding result," he said.

The racing will be held over the next two weekends, with the first team to win seven races claiming the America's Cup, which Oracle successfully defended in San Francisco four years ago when it beat New Zealand 9-8.