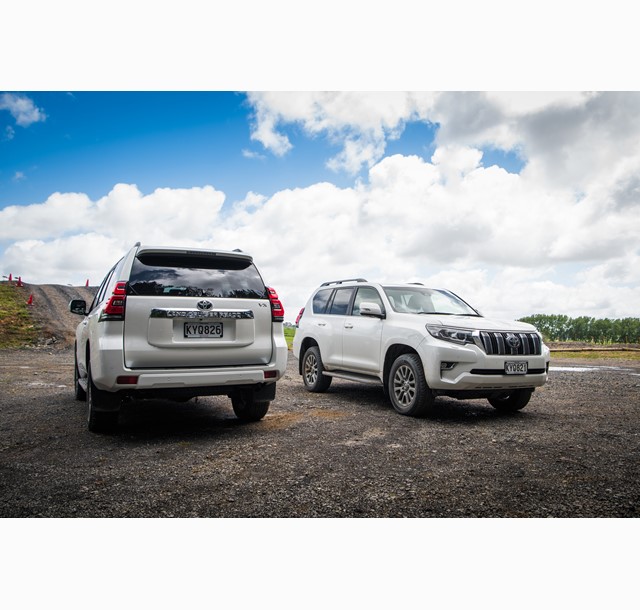 Serious off-road capability in a large SUV, while its occupants can travel in comfort with plenty of interior space, is a hall-mark of the seven-seater Prado.

Now rated to tow a maximum braked capacity of 3,000 kgs, an increase of 500 kgs over the previous model, expect to see the new Prado making light work of getting boats and caravans to popular holiday destinations this summer.

Spencer Morris, the General Manager of Product for Toyota New Zealand, says "it's hard to beat the Prado's usability for those with an outdoor lifestyle."

"With its ability to tow heavier loads the Prado will now make more people's shopping lists."

Another significant change is the introduction of the suite of safety technology bundled within Toyota Safety Sense, which includes the Pre-Crash Safety System with Autonomous Emergency Braking for vehicles and pedestrians; Lane Departure Alert with Vehicle Sway Warning; Automatic High Beam and Dynamic Radar Cruise Control.

The front of the Prado has had a complete makeover, to create a look that is more consistent between the Prado and Land Cruiser 200. The bonnet takes on a more chiselled look with a refreshed bumper and front guards. While the grille, headlights and fog lights have a more integrated feel.

At the rear, the door garnish is new, as are the tail light clusters and bumper.

For 2018, the GX has newly designed 17-inch alloy wheels with angular cut out spokes, while the paint finish on the 18-inch alloy wheels fitted to the VX and VX Limited has been revised with a brighter finish.

There are two new exterior colours - Peacock Black and Avant Garde Bronze in the eight-colour range.

Inside the more upscale interior, the dashboard, instrument binnacle and switchgear are newly designed. The revised centre console, which incorporates a flush-surface air-conditioning control panel, has a lower profile at the top for a sleeker appearance and improved forward visibility.

The audio display screen for all models increases from seven to eight inches and the GX gains a 4.2-inch colour multi information display.

All three Prado models come with the same 2.8 litre turbo diesel engine with 450 Nm of torque. The V6 petrol engine has been discontinued.

"The diesel engine option is the main choice of customers in this segment, so much so that petrol Prado sales had reduced to a level that is no longer viable, plus at Toyota we are realigning our petrol models to lower our overall carbon footprint. Prado is the biggest selling large SUV in our range, so we don't think the lack of the petrol model is going to impact sales numbers."

Adaptive variable suspension and the kinetic dynamic suspension systems (KDSS) are added to the Prado VX Limited. It also gets a driver's seat and steering column memory function, a power sunroof, CRAWL control and a rear-seat entertainment system.

The new Land Cruiser Prado is priced from: