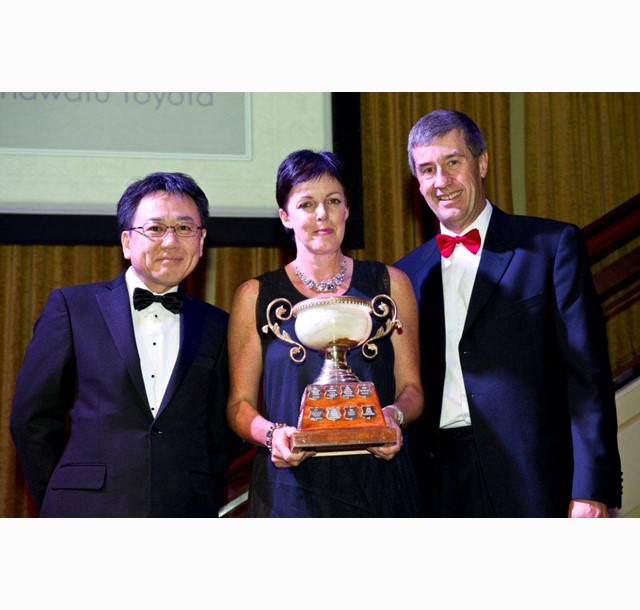 The Yokoi Cup for Dealer of the Year is awarded for overall excellence in dealership operations, market leadership and dealership facilities.

"It starts with a genuine family culture. Having my husband Brendon as General Manager, and his brother Fraser managing the new and used divisions, creates a supportive environment which the team of about 80 can achieve success in," says Debbie Hart.

"We pride ourselves on our connection to all four communities we operate in, and each member of our team believes they are going to make a difference to their customers every day."

Among other coveted awards: Giltrap City Toyota, Auckland, won the President's Trophy for outstanding customer satisfaction, and the Toyota Finance Dealer of the Year; and Lexus of Auckland City was named Lexus Dealer of The Year.

Steve Prangnell, General Manager New Vehicles and Dealer Operations, says the Awards are an opportunity for Toyota New Zealand to thank dealers for their consistently high level of performance.

"The support and commitment of dealers around the country contributes to the ongoing trust and loyalty in the Toyota brand in New Zealand. We have topped the sales charts for 24 years, and it is important for Toyota to acknowledge the contribution dealers make to this achievement," says Steve Prangnell.

"Having clear Awards criteria gives dealers targets to aim for, and every year the competition seems to be more intense as dealers aim for continuous improvement."

Award winners in addition to those named above:

The dealership must achieve a level of excellence that significantly exceeds that of similar sized dealerships in all areas of operation.

The dealership must achieve a level of excellence that exceeds that of similar sized dealerships in all areas of operation.