The inconspicuous technical side of the Toyota Racing Series 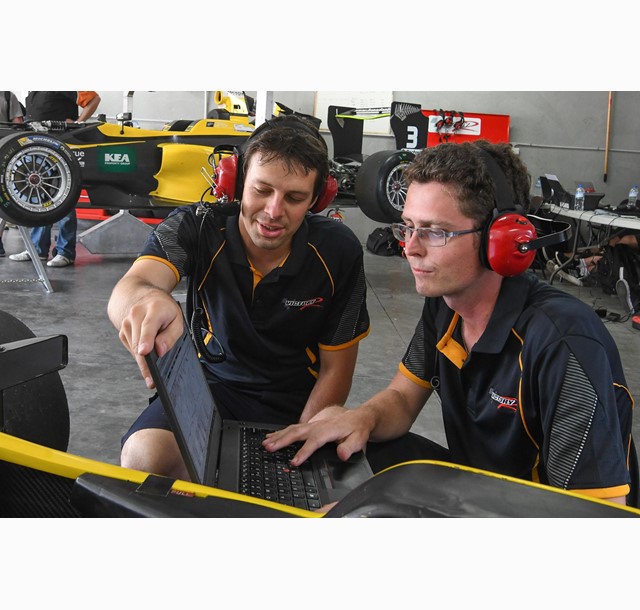 Two Aucklanders, David Versalko and Ash Blewett are among a number of degree qualified engineers, using their knowledge for the preparation of cars for the Castrol Toyota Racing Series which has its fourth round at the Bruce McLaren Motorsport Park at Taupo this weekend (Feb 4 & 5).

Versalko is now completing his fifth season in the series, which has a field of 20 drivers, including 17 from overseas.

"When I started the degree it was with the idea of getting involved in motorsport," said Versalko. During his under graduate time he competed in Formula SAE, which is run out of Melbourne by the Society of Automotive Engineers.

Students had to design and build a single seater race car. Versalko was involved in the construction of the carbon fibre chassis of the Auckland University entry for three years.

The 27 year old has spent the last four years working for teams in the northern hemisphere - two years in Indy Lights in North America and two years with Barcelona based Koiranen Motorsport running cars in the GP3 Championship, which supports Formula One Grand Prix.

This summer he has been engineering Brendon Leitch's efforts here. The Invercargill driver is currently tenth overall after some topsey turvey results at the last two rounds, despite qualifying on pole position for his home town main race at Teretonga.

While all the cars in the Castrol Toyota Racing Series are the same, drivers in conjunction with their engineers and technicians can adjust suspension, brakes and the aerodynamic settings of the wings to change the performance of the car and make it more suitable for the driver's own individual style of driving.

That means analyzing performance data and then changing settings on the car to make an improvement.

Blewett, like Versalko has a Bachelor of Mechanical Engineering from Auckland University and is in his first season as a race engineer, having won the Toyota 86 Championship last summer as a driver.

At the moment the 26 year old is on annual leave from his day job with Bridgestone New Zealand's passenger tyres division. Before completing the final year of his degree, Blewett spent a year with General Motors' under graduate programme in Melbourne working on noise and vibration reduction on its passenger cars at its Fishermen's Bend factory.

"I've always wanted to stay involved in the motor industry and motorsport," said Blewett, who admits he has a preference for the one make series like the Toyota 86 Championship and the Castrol Toyota Racing Series single seaters.

"It's a different challenge. You are looking for a more complete answer to get the best result."

Blewett said his engineering experience helped his own driving, while working in the five weekend championship provided a lot of experience in a short time frame.

Under Versalko's guidance Blewett has been in charge of Nikita Lastochkin's car. The California based Russian has arrived here as a virtual beginner and is logging up valuable racing kilometers before returning to the American season.

Both Versalko and Blewett are working for the Nelson based Victory R team, which is running four cars in the series.

The Castrol Toyota Racing Series follows a familiar weekend format consisting of free practice each Friday, qualifying and race one on Saturday and two races on Sunday at each event.

The remaining rounds are: