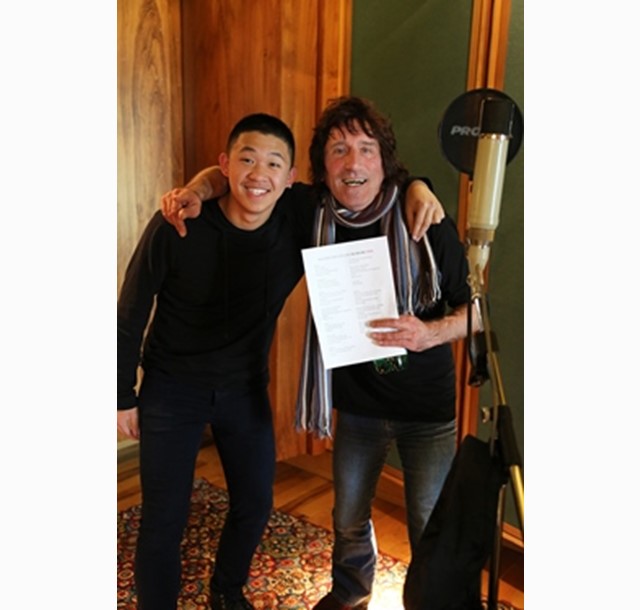 "I've written an original song about autism and enlisted the help of my peers that study music at ACG Parnell College with me and created a project that's gathering momentum.

"Now I'm working on a musical mentoring partnership with Mike Chunn from the Play it Strange Trust to perfect and record this song with Jordan Luck, the famous Kiwi singer from The Exponents. I can't wait to get it out there and raise awareness and say it's okay to talk about autism openly," says Chong.

Did we say impressive?

Chunn, formerly of Split Enz and Citizen Band fame, says that he was blown away by Kane's pitch.

"This self-assured kid walks in, unfazed, and presents me with a case for support for what is essentially his school project. I was really taken by his passion and his enthusiasm for recording and promoting 'We Are One', so I've pulled some strings and we're doing it," says Chunn.

The song was recorded and mixed at Neil Finn's studio in Auckland in August, with Kane assisting Eddie Rayner, best known as the keyboard player in Split Enz, as rookie sound engineer, Kane's dream job.

Chong adds: "I believe like all musicians that music is powerful and the healer to a lot of the world's problems."

Around a dozen of Kane's ACG Parnell College music course classmates gave 'Band-Aid' a run for its money on backing tracks and chorus.

"Kane comes from a strong, caring and entrepreneurial family who have encouraged his musical talent. He, in turn, is giving his time and talent to create something that will have great benefit. I am extremely pleased his considerable efforts will have such an impact."

Dane Dougan, CEO of Autism New Zealand which is the chosen charity for any funds raised over the course of the project, is very excited.

"I think this song will definitely help us to broaden general understanding of autism - it's just what's needed to make ASD more relatable and provide more 'talkability'.  People seem to have limited experience and understanding of autism, and often perceive the child as being just 'naughty'. That's something that needs to change," says Dougan.

Kane was invited to launch the song at a black tie event at the Autism New Zealand 2016 Conference in Wellington last August. Kane played acoustic guitar alongside Mike Chunn at the 300-strong event aimed at people on the autism spectrum, families/whanau, medical professionals, educationalists and others in the autism community.

Dougan says that one in three Kiwi classrooms contains a child with autism and that figure is growing. "ASD is the fastest growing developmental impairment in New Zealand, but it is also the most underfunded. It affects 77,500 New Zealanders - one in 58 people - equivalent to the entire Otago region. It has no known cause, and no known cure.

"Due to funding constraints, it can also take up to two years for a full diagnostic assessment of ASD, so we need all the help we can get," says Dougan.

Newmarket Rotary Charitable Foundation (NRCF) kindly funded the professional recording of We Are One. NRCF Chair Brian McMath said the Foundation is delighted to be involved in funding the recording as Education & Health are two key areas for Foundation Funding and 'We Are One" ticks both boxes.

"Kane is going to be our keynote speaker at our meeting on 6th September so we are looking forward to an inspirational evening," said Mr McMath.

Join the conversation on social media:

Environmental Choice New Zealand (ECNZ), the country’s most rigorous ecolabel has appointed Chloe Van Dyke to its Board of Directors. Ms Van Dyke is a sustainable business leader…