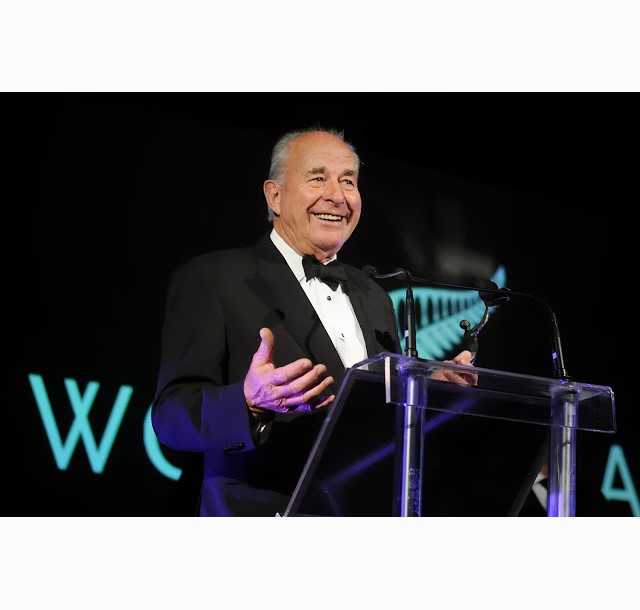 Sir Don received his award from Prime Minister the Rt Hon John Key at a gala dinner in Auckland tonight.

From modest beginnings as an army conscript, farm manager and real estate salesman, Sir Don went on to have the most distinguished foreign affairs career of any New Zealander on record.  He has been Commonwealth Secretary General; New Zealand's longest serving Foreign Affairs and Trade minister, a Nobel Prize nominee, and latterly, a member of the Order of New Zealand.

With such a superb CV, Sir Don became an obvious choice for judges contemplating a truly outstanding New Zealander to receive the Supreme Award in this year's World Class New Zealand Awards, which are delivered by Kea on behalf of New Zealand Trade and Enterprise.

"It would be hard to think of anyone more deserving of this honour then someone who has proven themselves constantly world class in 35 years of public service," says John Stace, chair of judges and Kea Global board member.

"Sir Don's championing of New Zealand - as well as championing Kiwi ethics such as fairness and humanity for all of the world's people - puts him into a league of his own."

Entering Parliament as the Member for Albany in 1978, and going on to service as the National Party's chief whip, Sir Don progressed to Deputy Prime Minister and Foreign Affairs and Trade Minister in 1990, a role in which he served a record-breaking nine years. While in Parliament he also held a diverse range of other portfolios including Veteran and Pacific Island Affairs.

Sir Don oversaw New Zealand's election to the UN Security Council in 1993 and sent Kiwi peacekeepers to help calm trouble-spots.  He also brokered an accord that ended a decade of civil war in Bougainville, Papua New Guinea, in 1997, for which he was nominated for a Nobel Peace Prize.

In 2000, Sir Don left Parliament to become Secretary-General of the Commonwealth, serving eight years. During his time in the role he had to negotiate a number of sticky political situations confronting the Commonwealth including Robert Mugabe's controversial rule in Zimbabwe and George Speight's attempted nationalist coup in Fiji.

He added the Order of New Zealand to his impressive collection of accolades in 2009, accepting the Knight Grand Cross of the Victorian Order from the Queen herself in the same year in recognition of his Commonwealth work.

With nine honorary doctorates to his name, Sir Don continues to lend his vast experience to a range of national and international organisations including the Global Panel Foundation, the Aspen Ministerial Forum, the NZ Latin American Business Council and the Waitangi National Trust Board.

Also announced at the gala dinner was the Friend of New Zealand Award, who has made an outstanding contribution to New Zealand. This year's Friend of New Zealand went to Australian newspaper editor Andrew Holden in recognition of his efforts as editor of The Press in the wake of the deadly 2011 Christchurch earthquake. Surrounded by death and disaster Mr Holden rallied his troops and kept The Press running as a vital source of information for the devastated Christchurch community.

Nominees for the annual Awards are evaluated against five main criteria, with a focus on promoting New Zealand internationally, building global connections and facilitating the exchange of information, knowledge and skills from, and about, New Zealand.

The full list of winners for the 2013 World Class New Zealand Awards is: