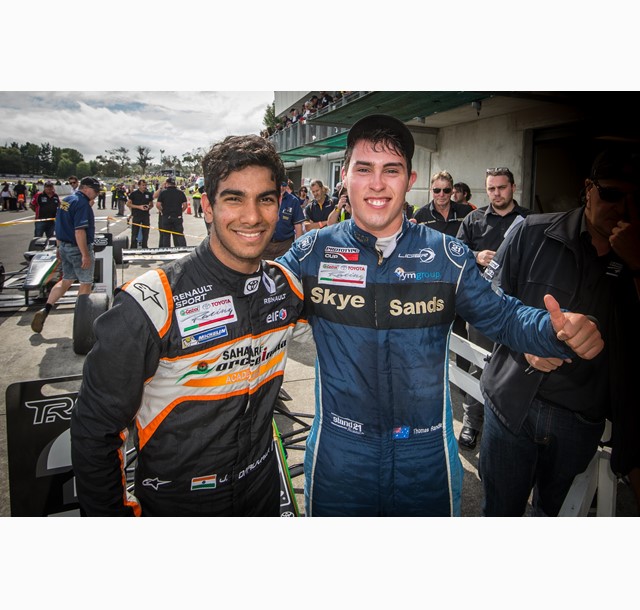 "It's an amazing relief," said Randle, who went into the race one point behind Pedro Piquet (Brazil) who finished fourth and one point in front of fifth place getter Richard Verschoor of the Netherlands.

It was Randle's driving in the morning's preliminary race that kept him in the title hunt after he got shoved back from fifth to 12th on the first corner.

"I went nuts after that," said Randle, who carved his way back through the field over the 15 laps and made a last corner, last lap pass of Ferdinand Habsburg to claim fourth and vital championship points.

"That pass saved me the title," said Randle. The driver's championship is the first for the Nelson based Victory Racing team, who prepared Randle's car.

Daruvala led the Grand Prix from start to finish, while Randle initially lost a place to Christchurch's Marcus Armstrong, while point's leader Piquet was second.

The race was red flagged after a first lap crash that saw Brazilian Christian Hahn barrel rolling onto the front straight. He walked away from the accident that also involved Luis Leeds of Christchurch.

Daruvala led while Piquet and Armstrong disputed second place, with the Kiwi getting ahead. As Piquet attacked Armstrong, Randle took advantage and passed the point's leader to get into a title winning position.

"I just decided to do the smartest thing and stay behind Marcus in his tow," said Randle.

Verschoor was in a lonely fifth place and seemingly out of contention after leading the series into the fourth round at Taupo last weekend.

Gaps between the first four oscillated, with Piquet attacking Randle late in the race for third place and the title, but then his tyres lost their edge and he drifted back over the last few laps, leaving Randle to take the spoils.

Randle's final margin was five points over Piquet, with Verschoor another seven points back, the closest competition in the Castrol Toyota Racing Series 13 year history.

Armstrong was the top kiwi finishing fourth overall, while Daruvala who was fifth on the points table could take some consolation in being the only driver to win two feature races over the five weekends, as he won the Lady Wigram Trophy at opening round at Ruapuna last month.