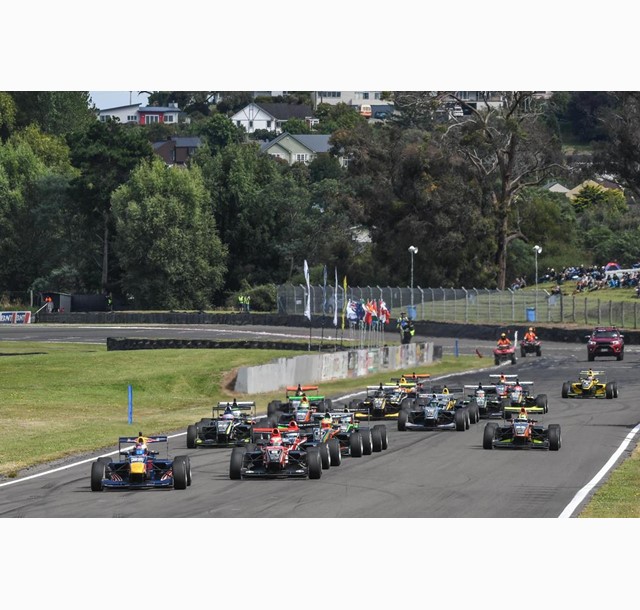 The series has now established itself as the best off-season racing, for North American and European drivers looking to get plenty of "seat time" before their main campaigns start.

Three Kiwis competed with the help of the local Kiwi Driver Fund that offset the cost of the engine and chassis lease package of the identical cars.

Three Formula One driver development programmes sent drivers here for the 5 round, 15 races over five consecutive weekends, which included plenty of practice and testing kilometres.

Jehan Daruvala returned for a second year with the Force India programme and won the Lady Wigram Trophy and the New Zealand Grand Prix. Richard Verschoor took out a very wet main event at Teretonga in Red Bull Junior colours, while Christchurch's Marcus Armstrong has his name on the Denny Hulme Trophy after winning the main race at Taupo under the auspices of the Ferrari Development Academy.

All the main protagonists return home with their programmes for the rest of the year mapped out. Series runner-up Pedro Piquet, Daruvala who was fifth, Englishman Enaam Ahmed sixth overall and Ferdinand Habsburg who came eighth are all off to the FIA European Formula 3 Championship.

Verschoor, who finished third in the series, after leading it until the second race at Taupo will be tackling the Formula Renault Euro Cup, the top series for that class of car.

In an indication of the budgets required, Randle is cutting his cloth to suit his coat. He will drive in the British LMP3 GT series for sportscars. There are probably a few drivers quite glad he will not be competing in Formula 3 or Formula Renault.

In fact Randle suggested the Grand Prix could have been his last single seat drive, at just 20 years old, as he cannot raise the funds required to continue climbing the single seater ladder, so sportscars are a more realistic career option.

Armstrong will team up with Prema, the team which has dominated Formula 3 for the last couple of years, but given his age - just 16 - he will probably do a season of Formula 4 in either Germany or Italy, or possibly both countries.

Just out of karts, Armstrong scored more points in the last six races. He had three wins and five other podium places and will be an early favourite for the title in 12 months time if he returns.

American Shelby Blackstock is returning for another Indy Lights campaign, while fellow countrymen Keyvan Andres and Cory Enders will race in the Pro-Mazda class, as will Californian based Russian Nikita Lastochkin, which is where Brendon Leitch would like to go after a successful test in the United States late last year.

But first there is the bogey of raising the necessary funding. He had an up and down season, winning the Saturday race at Taupo and qualifying on pole at Teretonga, but starting the race knowing the car could not be repaired properly after a three car crash in the morning race.

Driving from 20th to 8th at Manfeild after his spectacular somersault showed he has the race craft to go with the speed.

Frenchmen Thomas Neubauer and Jean Baptiste Simmenauer are probably headed for Formula Renault, while Ameya Vaidyanathan is looking to do a full season in British Formula 3.

The racing was always close in the Castrol Toyota Racing Series, with often only tenths of a second separating the top ten drivers in qualifying.

Until the final day's racing, Verschoor's drive in the wet to victory at Teretonga had been the standout individual performance, but then Randle turned it on at Manfeild.

In the Sunday morning race he got pushed wide from his fifth placed start to 12th. Then with some sublime overtaking manoeuvres got back to fourth place including a last lap pass around the outside of Habsburg in the final corner.

That saved his championship as both Verschoor and Piquet gained more points with first and third places. If Randle had stayed mired in mid-field he would not have earned enough points to stay in contention.

After dropping a place to Armstrong at the start of the Grand Prix, Randle used his smarts to get in front of Piquet who had started ahead of him, to lead the series aspirants and stay there.

Fast at all five rounds, Randle qualified well and showed he was a real racer when he needed to be and it gave the small Nelson based Victory team its first title which has traditionally been dominated by Giles Motorsport and the M2 squads.

If you are a single seater fan, the next series is less than 11 months away. Bring it on!