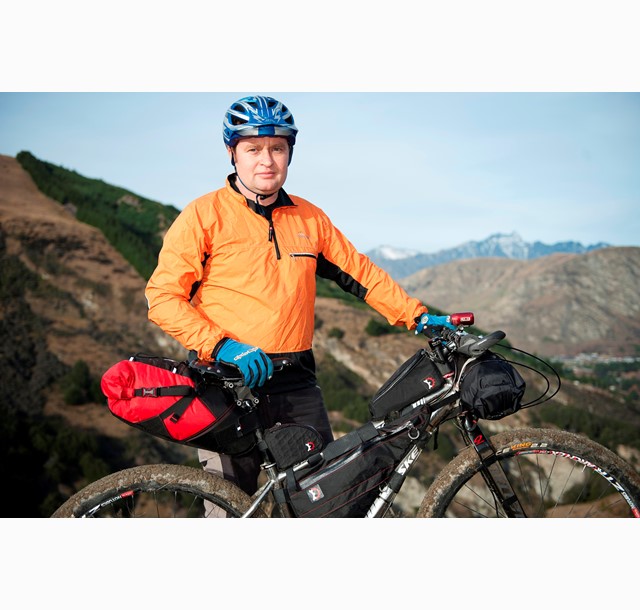 Carey officially launches his ambitious ride and fund-raising campaign on Saturday which is Global Motor Neurone Disease Awareness Day. The ride is scheduled for February next year.

He has been riding a bike since he was two years old, is mad keen on cycling and is something of a biking guru in Queenstown where he has helped organise races, develop mountain bike trails, and raise funds for local mountain bike projects.

He has competed in numerous races and is a life member of the Queenstown Mountain Bike Club and a trustee of the Queenstown Trails Trust but says his 'Race Against Time' - which will criss-cross New Zealand several times and see him riding an average of 100km per day for six weeks - is his biggest and most important bike challenge yet.

"It is so important because it is personal. It is about using my expertise to help the Motor Neurone Disease Association of New Zealand (MNDANZ) who have been helping my dad since he was diagnosed with the disease in 2012."

Carey's dad Barrie Vivian has spent a lifetime designing, making, painting and fixing Carey's bikes. He has also built several boats, houses, a sports car and even a two-seater aeroplane. Nothing has ever been too hard for him to fix.

"Motor Neurone Disease is something that neither Dad nor anyone else can fix," Carey says. "Doctors often say they wouldn't wish this disease on their worst enemy, as nobody understands why it happens and a cure is thought to be lifetimes away."

Motor Neurone Disease is the name given to a group of diseases which cause the nerve cells - neurones - that control the muscles enabling people to move, speak, breathe and swallow degenerate and die. With no nerves to activate them, muscles gradually weaken and waste away, causing loss of mobility in the limbs, and difficulties with speech, swallowing and breathing. Eventually the disease proves fatal.

Around 300 people in New Zealand live with Motor Neurone Disease. Someone in Australia dies from the disease every day.

Carey credits the MNDANZ with helping his dad come to grips with what he is going through. But like many charitable organisations, they rely on minimal funding and resources.

He decided to undertake a charity bike ride with the aim of raising at least $50,000 for the association. He developed the idea into the 'Race Against Time', a 4000km off road ride linking all the New Zealand Cycleway Trails between Cape Reinga and Bluff.

Carey admits his ride is less a race and more a planned adventure on which he needs to reach certain places within prescribed timeframes.

"The race part is more to do with the fundraising and public awareness campaigns leading up to my February 2015 start. The name is also symbolic of those with Motor Neurone Disease as many only have a short time to live."

Carey is in training for the Race Against Time on a bike which his father helped modify for the fundraising ride, a project Carey knows will likely prove to be one of Barrie's last welding jobs ever.

"At least I know that when it comes time for the ride, I am in safe hands. His welding has never failed me."

Carey knows the funds raised by his ride will be too late to help his dad.

"What has inspired me and my family is knowing that the funds and awareness raised will help New Zealanders who suffer the same fate as my dad in the future. They, like dad, will be faced with their own race against time to do everything they ever wanted before it is too late."

As a professional planner for almost 20 years and a member of the New Zealand Planning Institute (NZPI) Carey is well aware of the irony of being in a race against time.

"Planners don't have the reputation of being the fastest moving profession but that's a little unfair. If the planning is done right then any project can proceed smoothly and on time to deliver the desired outcomes, which is the approach I am taking to the ride."

NZPI CEO Susan Houston says Carey's story and his efforts are an inspiration to the organisation and its members throughout the country.

"We will support Carey however we possibly can and I expect all of our 2000-plus members to be cheering for Carey during his ride and doing whatever they can to support the cause."

For more information and to support Carey please visit www.raceagainsttime.co.nz .