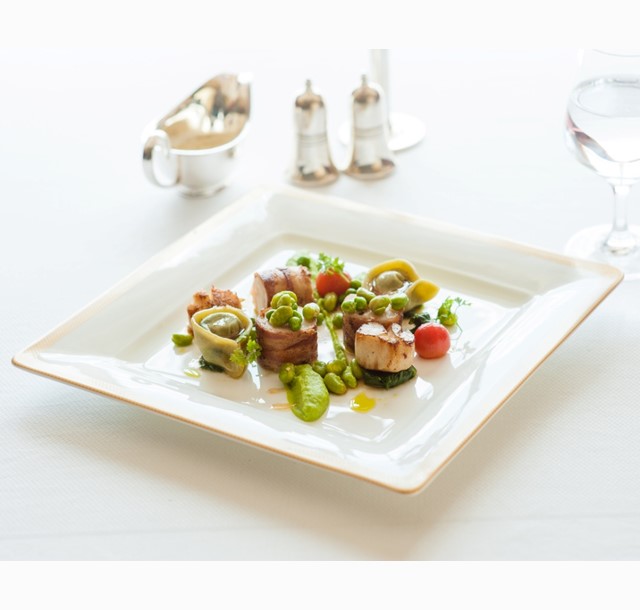 The 100-seat venue replaces Todd English and is based on the same concept as the popular and award-wining Verandah on Queen Elizabeth, with a slightly different menu featuring a sophisticated, contemporary and relaxed theme.

Cunard President and Managing Director Peter Shanks said Queen Victoria's new Verandah restaurant was an exciting addition to the Cunard culinary offering which now includes some of the most highly-rated dining at sea and no fewer than twelve different dining venues.

"The passenger feedback we have received for both lunch and dinner in these first days of the Verandah's operation has been very positive indeed and booking has proved essential for evening dining in particular," Mr Shanks said.

The menu has been created by Jean Marie Zimmermann, Cunard's global culinary ambassador and a Michelin starred chef.

A particular highlight of the menu is Carpaccio of Smoked Beef with Marinated Aubergine, Quail's Egg and Truffle Mayonnaise, which combines magical pairings of flavours with theatrical touches - the dish is served under a glass cloche filled with scented smoke.

There is a choice of seven entrees, eleven plats principaux and six dessert choices. Plats principaux include Beef and Lobster Flambéed with Cognac and Truffle with Parmesan Fries - the most popular dish to date - and Baked Rack of Lamb in Pastry with Morel Mushrooms and Madeira Reduction.

Todd English, offering a vibrant taste of the Mediterranean, will remain the alternative restaurant on Queen Mary 2 as befits her transatlantic crossings and more even mix of British and American passengers. This first-ever Todd English venue at sea has proved highly successful aboard Queen Mary 2 since its introduction in 2004.

Other evening dining alternatives include the Kings Court (Queen Mary 2) and The Lido (Queen Elizabeth and Queen Victoria).  By night, these areas transform into intimate and casual spaces that offer cuisine from around the world.

The Kings Court on Queen Mary 2 offers delicious Italian dishes in 'La Piazza', traditional British dishes in 'The Carvery' and flavours from across Asia in 'Lotus'. In addition the Cunard flagship features the Boardwalk Cafe offering burgers on deck.

Akio Toyoda, President and CEO, Toyota Motor Corporation, has been voted the 2021 World Car Person of the Year by the World Car Awards jury panel of 93 international journalists.

New Zealand builders will soon be able to replace plywood, particle board and plaster board, with low carbon, environmentally sustainable construction boards made from packaging wa…