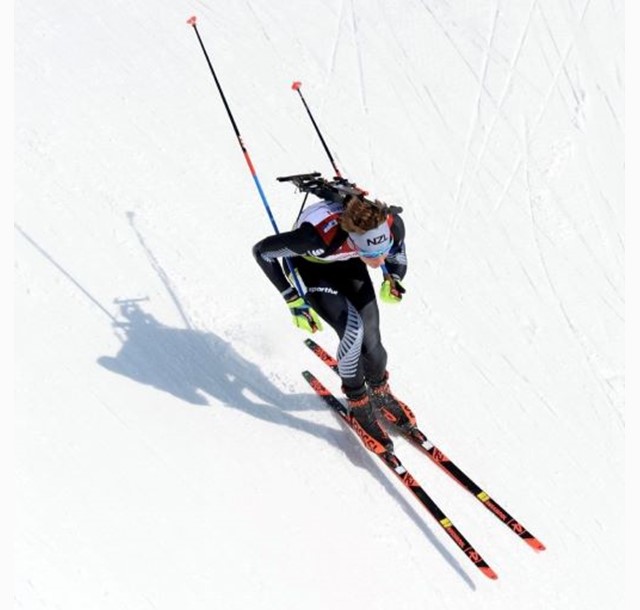 Promising young Wanaka biathlete Campbell Wright will be doing everything possible before 15 January to prove to the New Zealand Olympic Committee (NZOC) that he is worthy of selection for the Beijing Winter Olympics in February.

The 19-year-old is regarded by some, including his Italian coach Luca Bormolini to be possibly the most promising biathlete to emerge on the world scene since the legendary Ole Einar Bjorndalen the “King of Biathlon” who won 13 Winter Olympic Games medals – eight gold, four silver and one bronze – between 1998 and 2014.

Biathlon – a combination of cross-country skiing and rifle shooting – is a national sport in Norway. The sport is also extremely popular throughout Europe with thousands of spectators attending events and millions watching the sport live or delayed on sports programmes.

Campbell is only the second teenager behind Bjorndalen in the history of the sport to win Biathlon World Cup points and his huge potential has been recognised in Norway where he has been featured on national television. He is based in Livigno in Italy with Bormolini, who has coached him for the last five years, and whose brother Thomas Bormolini is the Italian biathlon champion.

Over the last 10 days Campbell has competed in biathlon World Cup events in Hochfilzen in Austria and Le Grand Bornand in France where he was aiming to prove to the NZOC that he has the form to achieve a top 16 finish at the Olympics. When Bjorndalen competed in biathlon at his first Winter Olympics in Lillehammer in 1994 at the age of 20 he came 28th but that experience helped him to go on to become the world’s greatest ever biathlete.

Campbell’s story is remarkable as he competes on the European biathlon circuit with just family funding, ski sponsorship from Rossignol and coaching support from Bormolini against corporately sponsored and nationally backed European teams with full-time support teams for coaching, physiotherapy, transport and accommodation logistics and even ski waxing.

Bormolini says the other teams are very kind to the lone Kiwi offering rides to events and assistance with his ski waxing. He says Campbell’s European, Japanese and American rivals are in awe of what he has achieved for one so young and what he could achieve in future.

Biathlon is an almost unknown sport in New Zealand with only about 10 registered biathletes who mainly train and compete at Snow Farm next to Cardrona skifield between Queenstown and Wanaka. However, Campbell will be familiar to many Wanaka townspeople as he trains on the roads on roller skis in the off-season.

Bormolini says Campbell is the most focused and determined biathlete he has ever coached and if he gets the opportunity to compete in Beijing in February it will stand him in good stead to represent New Zealand well at future Olympic Games and possibly add to New Zealand’s national tally of three medals (one silver, two bronze) in the 94-year history of the Winter Olympics.

“Campbell is already putting New Zealand on the world map with his performances so far,” says his Dad and possibly biggest fan Scott Wright. “It’s hard to overestimate how big a deal biathlon is in Europe and the international spotlight that will be shone on New Zealand if Campbell is able to compete at Beijing and future Olympic Games.

“A medal at Beijing is unlikely, but not out of the question. If he is given the opportunity to compete in Beijing and gain the valuable experience that Bjorndalen did, then a medal for New Zealand from Campbell at future Winter Olympics is a distinct possibility.”

Scott Wright said New Zealand-born Campbell wants to compete for the country of his birth but the United States has seen his potential and is eyeing him up for the future if he is not selected for New Zealand. Campbell’s parents Scott and Alison are both New Zealand and US citizens making Campbell eligible for US selection.

United States biathlon team head coach Armin Auchentaller says Campbell would be second or third ranked in the US team and would be chosen by them for the Beijing Winter Olympics if he was available.