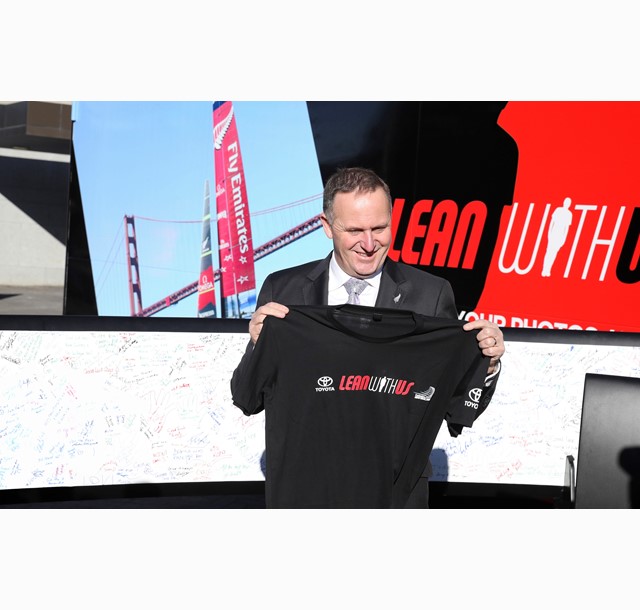 His signature joins those of Kiwi well-wishers from all around the South Island and Wellington where the nationwide 'Lean with us' tour has travelled over the past week. The tour continues through a further 10 North Island locations between now and July 12.

"It's great to see the Prime Minister signing the dagger boards on Toyota's 'Lean with us' tour which just illustrates again the fantastic support we have received from the Government. Without the Government's backing, we couldn't be doing what we are doing. We are in San Francisco determined to win the America's Cup and bring it home because we know it will deliver benefits to New Zealand as a whole. It's going to be tougher than ever but huge support from around the country is what will spur the guys on more than anything."

Toyota, together with Emirates Team New Zealand, built the two replica dagger boards and created the 'Lean with us' tour to give Kiwis the chance to sign the boards and show their support for the team.  When the dagger boards are covered with the best wishes from people around the country, they will be delivered to the team in San Francisco and sit proudly at the base to remind the team every day that New Zealand is right behind them.

The dagger boards are one of the most innovative and important components of Emirates Team New Zealand's giant AC72 catamaran, enabling it to race at spectacular speeds, and are central to Toyota's 'Lean with us' campaign.

Toyota General Manager of Marketing Neeraj Lala says having the Prime Minister sign the dagger boards underlines not only the support for Emirates Team New Zealand at the highest level but also the importance to New Zealand of bringing the Cup home.

"For that to happen it would be great to see Kiwis everywhere supporting Grant Dalton and the team. We have created the 'Lean with us' campaign to make it easy for Kiwis to get on board and help make the boat go faster."

"The campaign's overall aim is to bring New Zealand together and get behind Emirates Team New Zealand in a way that is fun and appeals to all Kiwis," Mr Lala says. 'Lean with us' is a play on our boats' ability to foil at spectacular speeds.  We've taken the simple concept of 'leaning' (the first step towards foiling), which is fun and will appeal to all ages, and turned it into a way for Kiwis everywhere to show their support for the team."

In addition to the nationwide tour, Kiwis can participate in 'Lean with us' through an online competition at www.leanwithus.co.nz that invites people to submit their best leaning photo, share the photo with friends and family but ultimately show their support for Emirates Team New Zealand. A lucky winner and their partner will join the team in San Francisco for some close up action.

The Toyota 'Lean with us' tour is supported by The Radio Network and The Warehouse.

The remaining stops on the tour are as follows.