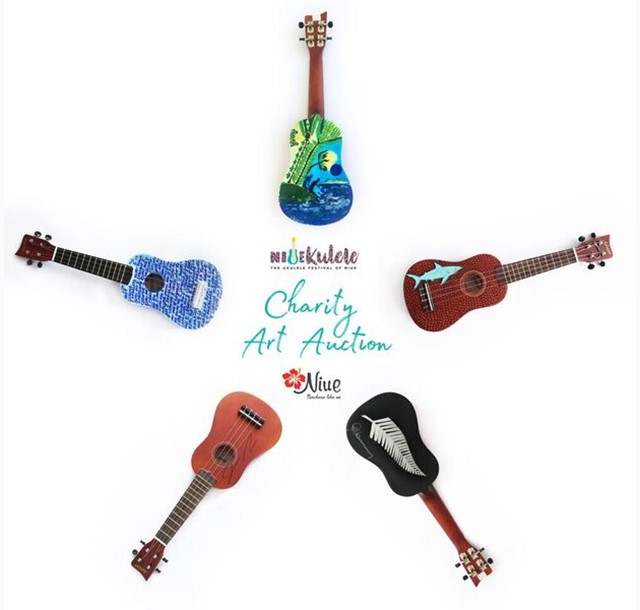 Ardern and Gayford were among a group of Kiwis and Niueans who decorated ukuleles that went up for auction on Trade Me last night: http://bit.ly/2I4queO. Bidding started yesterday and will continue to 11 March with all funds going towards providing ukuleles and music lessons to Niue's Primary and Secondary Schools.

Among the group of ukulele artists are All Black great - Sir Graham Henry, Niuean Musician Tommy Nee and renowned international artist John Pule. As a work by an established Pacific artist, it is expected that Pule's ukulele will be sold at a premium price. He uses his current style to decorate his ukulele, which features a bright, colourful painted scene. This signature style is seen in pieces he has in major public collections: http://bit.ly/2CP7Dk9.

The auction is being organised by Niue Tourism as part of its biennial international Ukulele Festival. Niue Tourism Chief Executive Office Felicity Bollen says having Ardern participate is a real win.

"These will most certainly be prized items and we're hoping they attract some premium bids. The artistry on the painted ukuleles is also very special and we're very grateful for the efforts of those contributing" she says.

The auction is a precursor to Niue's annual ukulele festival, NiueKulele, which runs from 16-20 March. NiueKulele will feature some of the Pacific's best ukulele players and teachers such as Australian blues maestro Ryo Montgomery and Hawaiian sensations Jody Kamisato, Honoka and Azita, who are presenting workshops, concerts and instructional sessions.

Other key events include a visit to Niue by the PM, whose father Ross is the current New Zealand High Commissioner on the island. Ardern will visit on 5 March with partner Gayford and Deputy PM Winston Peters as part of the official "Pacific Reset" tour.