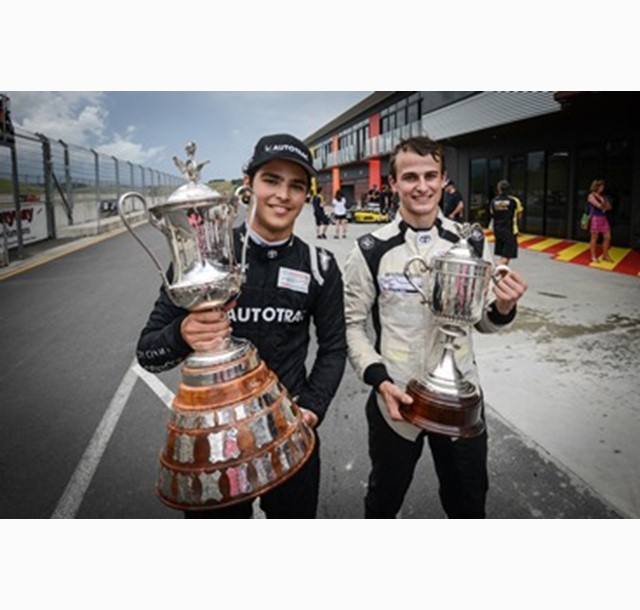 First presented in 1921, the solid silver trophy used to be awarded to the winner of the New Zealand Grand Prix and has the names of no less than five different Formula One World Champions on it.

Piquet's father Nelson, himself a triple world champion looked even more pleased than his son at Pedro's success, perhaps recognising the significance of the trophies history.

The result has taken Piquet up to second on the points table after starting the weekend seventh.

"I had a very good start," said Piquet. "Getting pole position in qualifying yesterday was really important."

Piquet is now confidently looking towards the remaining rounds of the TRS at Taupo and Manfeild. "Each day I've been getting better in the car," said Piquet.

Once he had established a lead, Piquet managed the gap back to second placed James Munro from Christchurch, who had made a great start from third on the grid.

"Jehan (Daruvala who finished third) piled on the pressure," said Munro, "but I managed to hold him off."

After a frustrating start to the series, Munro had a good weekend to convert the speed he has shown into good results. "The car has been great this weekend. It's nice to get a result for all the team's hard work."

The most excitement came after the race was stopped to retrieve crashed cars and with two laps to go the restart saw the field go into the first corner four abreast, amazingly they all survived.

Earlier in the day Guanyu Zhou had won the reverse grid race from Invercargill's Brendon Leitch who started the main event from 12th on the grid and managed to advance to tenth, but dropped to fifth on the closely contested points table.

Series leader Lando Norris was supposed to start from the front row of the grid in the main race but was penalised eight places for an incident in the preliminary race and had to be content with a sixth place finish.