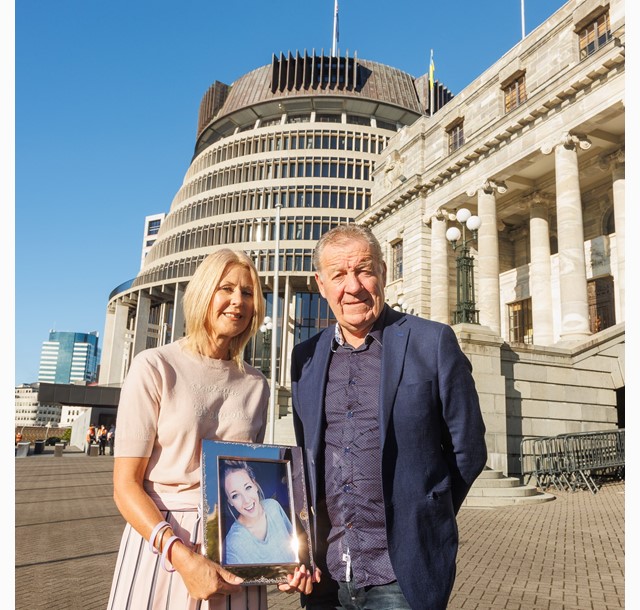 A delegation from the Meningitis Foundation today (Thursday 31 March) met with politicians at Parliament to push for the funding of vaccines for all 16-year-olds to protect against the killer disease.

The delegation, which included the parents of two teenagers who died suddenly from meningitis, presented a 6,357-signature online petition urging the funding to National Party health spokesperson Dr Shane Reti today (31 March) and met with a number of other MPs to discuss the issue.

Meningococcal disease affects between 100 and 200 Kiwis a year, with around 10-20% of those dying from the disease – typically within 24 hours of contracting it, says delegation leader, Ashburton parent Gerard Rushton. But many more patients – up to 30% of those affected – suffer severe permanent impairment and disability including loss of limbs, hearing loss, learning difficulties, cerebral palsy and brain damage, says Rushton, who with his wife Claire lost their daughter Courtenay to the disease in 2014.

“It’s a disease that can progress very rapidly and if not detected and treated in time, doctors may be powerless to save the patient’s life. For those who do survive, but are badly disabled by it, the cost of care over the rest of their lifetime can be enormous. But all that can be avoided by a simple set of vaccinations.”

The petition calls for Parliament to make two currently available vaccines, that cover the most common strains of meningococcal disease, free for all Year 11 students or young people aged 16. They can be administered safely alongside other vaccinations, including the flu and COVID-19 jabs, with no stand-down period. One of the two vaccines which protects against meningococcal strains ACW&Y is currently ONLY free to 13-to-25-year-olds entering their first year of living in boarding-school hostels, tertiary education halls-of-residence, military barracks or prisons. But the other vaccine for the meningococcal B strain isn’t part of that arrangement – and currently accounts for a significant proportion of the cases arising, says Rushton.

He says a booster is required for the meningococcal B vaccine, so to be fully protected a 16-year-old requires a three-jab course, currently costing $450 – which is out of reach of many Kiwis.

“The disease affects all ages, but 13-to-25-year-olds are particularly vulnerable, while Māori and Pasifika communities are also at high risk of catching the disease and not receiving timely treatment.

Rushton says currently only a very small percentage of kiwi teenagers are able to pay privately to access the vaccines compared to the many thousands of teens who would be covered if the vaccine was funded. “At present, there is a real inequity in our society over the availability of these vaccines. It’s relatively affordable to some - but out-of-reach for many.

“Tragically, without access to the vaccines, more teenagers will die from this horrific disease each year before they get the keys to adulthood.

“We see this as a no-brainer. These vaccines provide protection at a point when teens are most at risk and would close the door to future loss and grief for families and significant costs to the New Zealand health system.”