Norris has one hand on Toyota Racing Series title 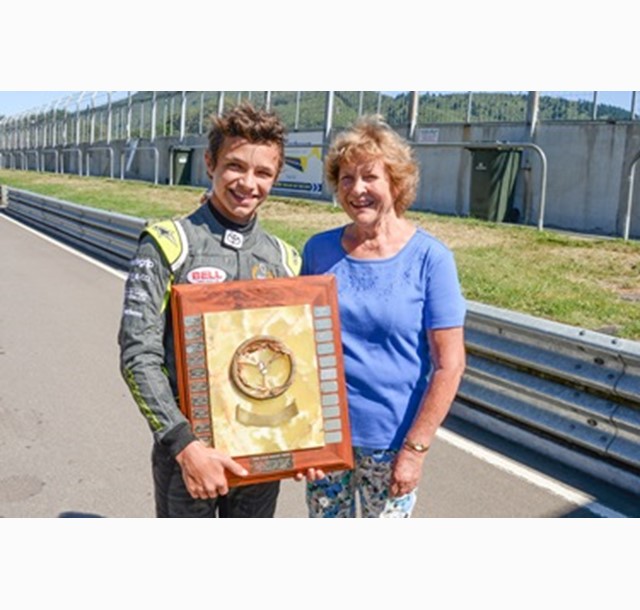 Norris, who was never troubled by second placed Pedro Piquet, is now 86 points in front of the Brazilian 17 year old, who has a 15 [point advantage over Chinese 16 year old Guanyu Zhou who finished third.

"It was a bit easier than Saturday's race, when Pedro pushed me quite a bit" said Norris, who is not counting on the title just yet. "There's still a lot of points up for grabs."

Piquet had a realistic view of his second place. "The championship is more important than one race so I am happy with the weekend."

Norris only needs not to finish one race and his closest rivals take a victory, worth 75 points, and the championship will come down to the final of the three races at Manfeild.

While the leading trio had an uneventful time, there was plenty of action further back in the field.

Christchurch's James Munro who started third was effectively taken out of contention by Artem Markelov of Russia who dived down the inside with an over ambitious overtaking attempt into the first corner with his left hand wheels on the grass.

He couldn't get the car braked and turned into the corner properly and took off the front wing of Munro's car which also suffered slight front left suspension damage.

Markelov ended up sliding off the track backwards.

In the mayhem, Brendon Leitch who had started seventh grabbed third place, but Zhou got passed him as the Southlander's tyres lost grip. Austrian Ferdinand Habsburg made several passing attempts which Leitch fended off gamely before finally succumbing.

Rookie 17 year old Taylor Cockerton from Pukekohe had his best race of the series to finish sixth in his first season in TRS.

Meanwhile Munro turned in the drive of the race after stopping to replace his front wing, he restarted 17th and finished 11th only just failing to nab tenth on the final lap.

With some great passing moves he leap frogged up the field.

Earlier in the day Jehan Daruvala had won the 15 lap preliminary race which Leitch had led comfortably until a mid-race caution brought out the safety car.

He got swamped at the re-start in controversial circumstances which were reviewed by race officials, but left the final result standing.

"The flag man put out the green flag for the restart," said Leitch. "But he didn't wave it."

While Leitch hesitated the others did not. "I couldn't see the flag," said Norris. "I went on the call on the radio" (from his race engineer on the pit wall). "It was a bit confusing."

Daruvala got the best restart to take the win from Norris and Zhou with Leitch a frustrated fourth.