Myth busted: Auckland not the land of latte lovers 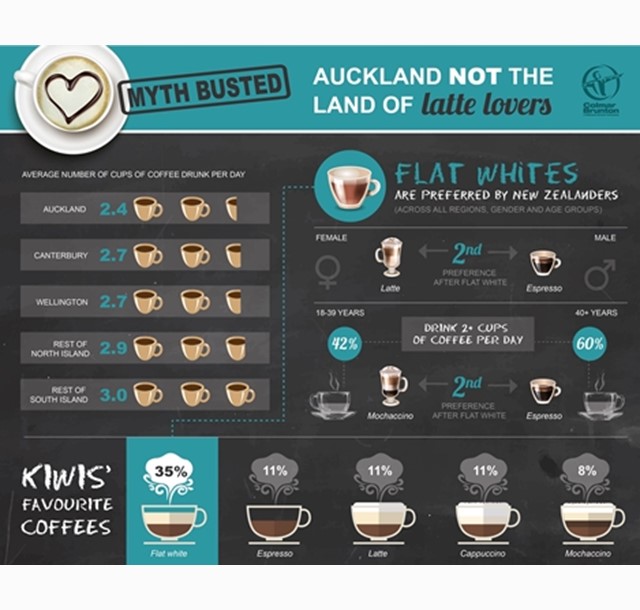 In fact, a newly released Colmar Brunton survey tells us not only is Auckland's coffee consumption conservative compared to the rest of the country, the popularity of the latte itself is languishing well below the legendary Kiwi flat white, the runaway favourite among New Zealand's caffeine addicts.

Survey results show that Aucklanders drink an average of 2.4 coffees per day compared to 2.7 for those elsewhere in New Zealand - including Canterbury and Wellington.

"Based on the statistics it's clear Aucklanders don't deserve their latte sipping reputation, which appears to be a total myth," Colmar Brunton CEO Jacqueline Farman says. "While the survey doesn't pin point one city or town as the nation's coffee consumption capital, it does clearly show Wellingtonians and Cantabrians drink more coffee - 2.7 cups a day on average."

And while the humble flat white is the most popular first pick around the country (35% of Kiwi coffee drinkers rated it their favourite caffeine hit), similarities in preference stop there.

Wellingtonians lean towards an espresso next, with 18% of the capital's coffee consumers appreciating the drink in its purest form. Second choice for Aucklanders is the mochaccino, coming in at 12%, while in Canterbury 17% favour the cappuccino.

And when it comes to lattes, Canterbury clearly leads the way with 14% rating it their first choice compared to 11% in Wellington and a mere 9% in Auckland.

Cerebos Greggs Country Manager Andre Gargiulo says it is no surprise that coffee tastes differ from region to region.

"The survey results reflect what we have seen in our Robert Harris cafes as our franchisees have got to know our customers around the country.

"It's critical to understand customer preferences so we can develop offerings that resonate and cater to their specific tastes."

Ms Farman says that coffee consumption appears to increase with age, with 60% of those aged 40 or over drinking at least two cups a day, compared to 42% of 18-39 year-olds.

Females consume less coffee than their male counterparts, averaging 2.4 cups a day compared to three cups for blokes, with almost a third of women completely abstaining from the stuff. Only a quarter of men surveyed claimed never to drink coffee.

For men, espressos follow flat whites in popularity - the top choice for 13% of males compared to only 8% of females.  The exact opposite is true of lattes - a favourite for 13% of women compared to just 8% of men.

And based on coffee consumption, marriage seems to be an exhausting venture with only 26% of coupled folk saying no to a cup of Joe, in comparison with 39% of sprightly singles who have no desire or need for a caffeine boost.

Today's younger populace seems to have more of a sweet tooth than their older counterparts, with the 18-39 year olds making up the majority of mochaccino and latte drinkers. The 40+ age group favoured flat whites, espressos and cappuccinos.