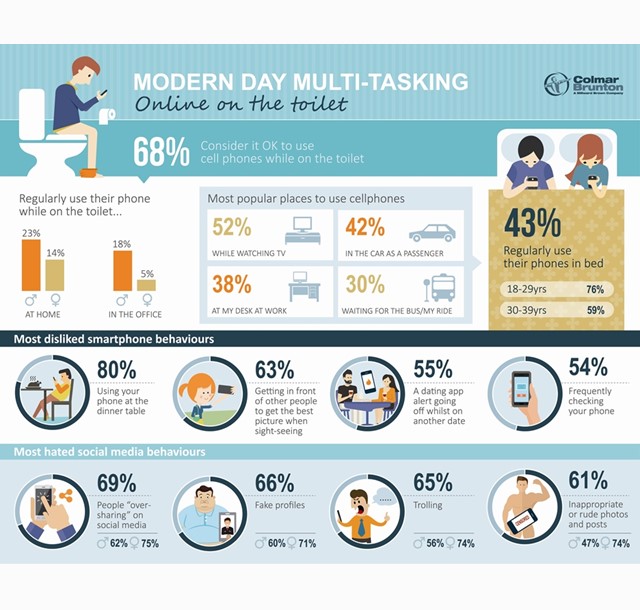 According to the nationwide Colmar Brunton survey 92% Kiwis aged 18+ years use a cellphone - with 75% using smartphones - and they are increasingly attached to them anywhere and everywhere.

About a third of Kiwis surveyed said they couldn't live without their smartphones - up to 53% for 18-29 year olds and 43% for 30-39 year olds -  and Colmar Brunton CEO Jacqueline Farman says almost 30% admitted they spend too much time online.

Females are more likely than males to say they spend too much time online - especially among 18-39 year-olds where more than half (54%) admit to it. They are divided into those who would like to curb the habit and spend less time online (34%) and those who have no plans to reduce their online hours (19%).

"Given the increased importance of smartphones in people's lives, it's not surprising that they are being used anywhere and everywhere, even in situations that not so long ago would have probably been considered questionable," Ms Farman says.

Only 32% of those surveyed were put off by the idea of using your phone while on the toilet, indicating a majority of over two thirds of Kiwis consider it OK to engage online while performing their ablutions.

Despite the fact that women have a reputation for multi-tasking, texting on the toilet appears more of a male pastime. A total of 23% of men admitted using their phones on the toilet at home compared to 14% of women, while the divide was even more pronounced in the office with 18% of men and only 5% of women fessing up to using their cellphones while relieving themselves.

And it looks like cellphones may be becoming a significant distraction between the sheets as almost half (43%) of all those surveyed regularly use their phones in bed. That figure jumps to more than three quarters (76%) for 18-29 year olds and almost 60% for 30-39 year olds.

"Men and women are almost equally likely to be online in bed and it seems that for a great many Kiwis their cellphone is the first thing they reach for in the morning and the last thing they put down at night," Ms Farman says.

But Ms Farman says while it may seem like anything goes in an online age where people increasingly seem superglued to their cellphones, there are some things that still go against the grain.

"Using your phone at the dinner table is a no-no for 80% of people while cutting in front of others to take sight-seeing snaps or selfies on a cellphone is the second biggest bugbear, offending 63%."

More than half (55%) also considered it rude to have a dating app going off on your smartphone while actually on a date, just ahead of those who are clearly fed up with their friends' constant need to check their phones (54%).

Females are more likely than males to be offended by such smartphone sins, as they are with the most hated social media behaviours - oversharing, inappropriate photos or posts, trolling and fake profiles. Each of those annoyed more than 70% of women surveyed with men considerably more laid back about them especially when it comes to inappropriate photos or posts (47% disapproved) and trolling (56%).