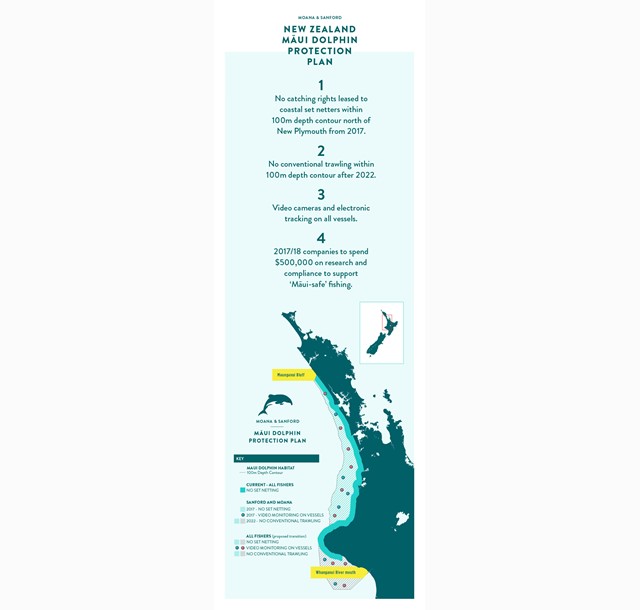 Fishing companies, Moana New Zealand and Sanford are working with WWF-New Zealand to help ensure Maui-safe fishing in the rare dolphin's habitat along the west coast of the North Island.

The companies have today announced an action plan to end coastal set netting within a year and remove conventional trawling methods from the Maui dolphin habitat by 2022.

The Maui dolphin or popoto (Cephalorhynchus hectori maui) is the world's rarest and smallest marine dolphin. They are only found off the west coast of New Zealand's North Island in relatively shallow waters.

Moana New Zealand and Sanford CEO's, Carl Carrington and Volker Kuntzsch say they are taking action to reduce the fishing related threats from the Maui's known habitat range, which runs from Maunganui Bluff in the North, to the Whanganui River mouth in the South and out to a depth of 100 meters.

"Over time we will extend the fishing exclusion out to the 100 metre depth across the Maui habitat, to remove set netting and trawling from their zone, and we will also increase the amount of monitoring on vessels."

Sanford Ltd has the largest catching presence along the west coast of the North Island. Moana New Zealand is a significant west coast quota owner and leases their catching rights to contract fishers.

Volker Kuntzsch says the companies understand that the initiatives will adversely affect independent fishers who also catch in this area. 'Several of whom lease catching rights and have long standing business relationships with us', Kuntzsch said.

"Some of these fishers will find themselves in very difficult situations and be financially challenged by our decision - we have been meeting with them and commit to continuing to stand alongside them if they choose to transition to more dolphin-safe methods such as long lining".

'We're committed to working with all west coast fishers and groups in this initiative.  We're also looking to the Government to support this plan by finding ways to assist fishers to transition to dolphin-safe fishing methods, so the commitments we're leading with are adopted by all fishers across the whole Maui Habitat."

Under the plan, Moana and Sanford are also putting up $500,000 to put video monitoring on all vessels and boost research and compliance across the vessels fishing for them.

"We all have a role to play in protecting these mammals.  Our livelihoods depend on what's out there in the oceans, and that does not only mean on the species we catch, but the health of the whole ecosystem."