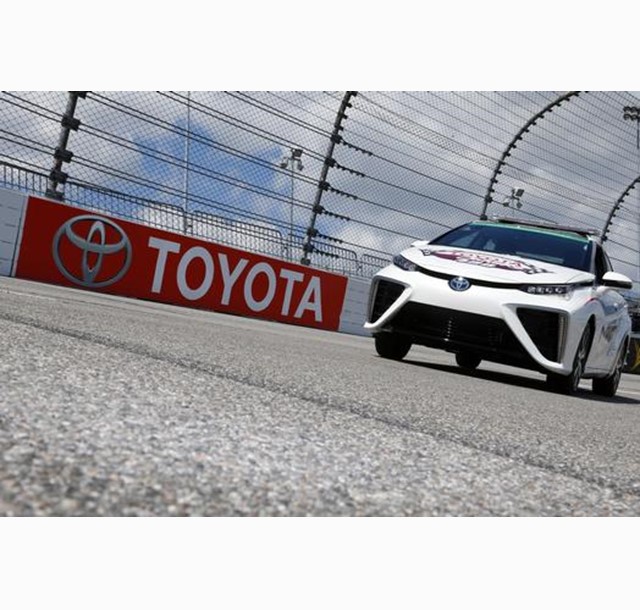 The Mirai is the first hydrogen-fuelled vehicle to head a NASCAR race. It led the Sprint Cup Series field to the starter's green flag at Richmond on Saturday night Eastern USA time while emitting only water out of its tailpipe along the way.

"Having a hydrogen fuel cell vehicle pace the Toyota Owners 400 is a historic moment for both Toyota and NASCAR and we're proud it's the Toyota Mirai," said Ed Laukes, vice president of marketing, performance and guest experience, Toyota Motor Sales, U.S.A. "Bringing the Mirai to Richmond to lead this important race is another way for Toyota to showcase our innovation and environmental leadership."

The Mirai is a four-door, mid-size sedan that uses no gasoline and emits nothing but water vapour. The fuel cell electric vehicle is powered by hydrogen, refuels in about five minutes and travels up to 500 kilometres on a full tank. It will go on sale in California later this year.

The Mirai was tested and approved by NASCAR to lead the race after a test session at RIR. It follows a Toyota Camry Hybrid that was the first hybrid vehicle to pace a full NASCAR race at Charlotte's Coca-Cola 600 in May 2009.

Toyota currently provides pace cars at 12 of the 23 tracks hosting NASCAR Sprint Cup Series events. The Mirai was used only for Saturday night's race; the Camry Hybrid was the pace car for the XFINITY support series.