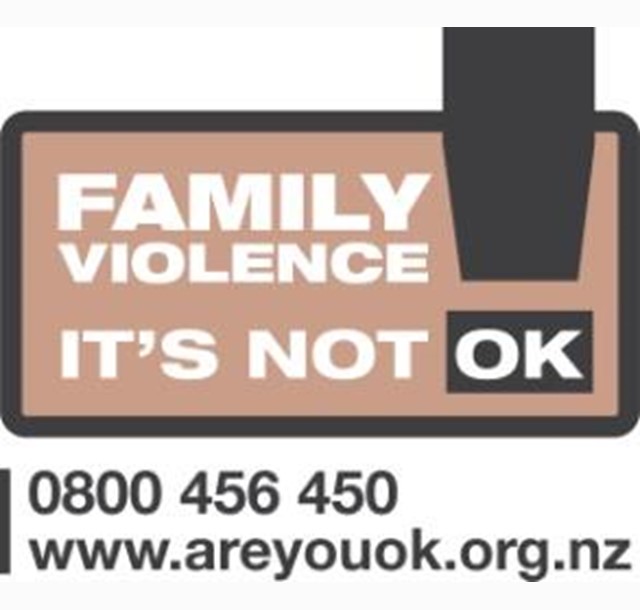 Joining the campaign was the brainchild of the students at Mangere College and includes a number of student-lead initiatives which ensure fellow students are supported within the school to help prevent family violence they may be experiencing at home.

Initiatives include student volunteers who have become champions that their fellow students can approach for confidential advice on how and where to seek support for family violence matters. Elements of the 'It's not OK' campaign have also been embedded in the school curriculum and a student-designed billboard which depicts the school's stance against family violence is being unveiled today at a launch event at the school.

Mangere College student champion, Desaray Williams, says that joining the It's not OK campaign and implementing the measures across the school is a public statement and commitment by students against family violence in their community.

"We were shocked by the rates of family violence in New Zealand," says Desaray.

"We want to make a difference in our community and spread awareness of how others can be part of the solution to this issue, which affects every community.

"We challenge other schools to join the campaign and create communities that are free from family violence," says Desaray.

The senior students of Mangere College were inspired to join the 'It's not OK' campaign during a school camp where Family Works Family Violence Prevention Advocate and 'It's not OK' ambassador, Jude Simpson, gave a presentation to the students about the impact of family violence in our communities.

Mangere College Principal, John Heyes, says that Jude's presentation had a profound effect on the students.

"The students listening to Jude's presentation that day were so moved that they felt compelled to act and I am extremely proud of the way they have worked to make this relationship with the campaign happen," says Mr Heyes.

"Becoming an 'It's not OK' school builds on the great work Mangere College has already been doing in supporting students to act with respect and responsibility whilst at school, and this campaign allows these values to reach out beyond the school gate," says Mr Heyes.

Family Works Family Violence Prevention Advocate and a former victim of child abuse, Jude Simpson, says she is thrilled Mangere College students have led the way in becoming the first school to implement such extensive measures.

"By Mangere College students taking the lead on this it sends a very clear message that family violence, in any community, is not OK," says Jude.

Deputy Chief Executive Officer for the Ministry of Social Development's Family and Community Services, Murray Edridge, says the ministry is proud to be partnering with Mangere College via the 'It's not OK' campaign.

"Young people can influence their peers, their families and their communities and it's through this initiative Mangere College is helping to create future families that say violence is not OK," says Murray.

The launch event today at Mangere College brought together all the supporting agencies including 'It's not OK' campaign, the NZ Police and Family Works - an organisation providing social services to victims of family violence.

Christopher Barry, Senior Sergeant for  Counties Manukau Police, said family violence happens in every community and it's initiatives like Mangere College students signing up to the 'It's not OK' campaign which help to give a serious social problem visibility.

"We know a lot of family violence is not reported to the police or social services and we want young people and their families to know where to turn for help," says Christopher.

"Family violence is an issue that must be taken seriously."