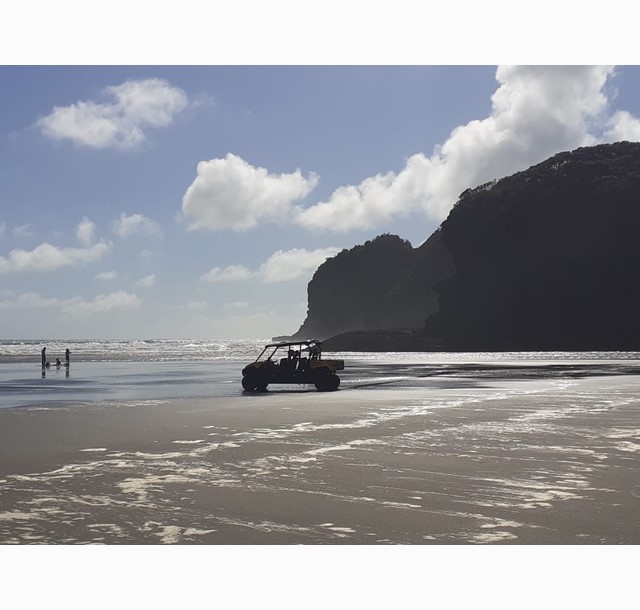 An ill-fitting lifejacket and an angel ring thrown by a member of the public saved the life of a fisherman swept off the rocks at O’Neill’s Bay, near Bethells Beach, on Auckland’s west coast this afternoon.

Surf Life Saving’s rescue communication centre, SurfCom, was notified by Police about the incident just after 1pm today. The Bethells Beach Surf Club Search and Rescue Squad was activated and responded immediately to the scene.

The Police helicopter Eagle dropped a swimmer into the water who helped the man return to shore. Lifeguards then transported the man back to the Club’s first-aid room to treat for hypothermia, before he was flown to hospital by Westpac helicopter.

A second person, who threw the man a nearby angel ring, was also checked over by lifeguards but required no further medical assistance.

“There are two metre swells rolling through today and rough conditions because of the onshore winds,” says SLSNR Lifesaving Operations Manager James Lea - one of the lifeguards that responded to the incident.

“The man’s lifejacket undoubtedly made a difference in this situation. We had the exact same incident this time last year with a fisher swept off the rocks at O’Neill’s. He wasn’t wearing a lifejacket and our SAR Squads ended up recovering his body a few days after he went missing.”

Lea says it’s vital people use lifejackets that fit, however, as today the patient’s lifejacket ended up coming off in the water.

“While it was still useful as a flotation device, by the time the rescuers arrived he was pretty exhausted. It was the combination of the lifejacket and the angel ring that helped keep him afloat long enough to be rescued.”

Today’s incident was a good reminder that fishing from the rocks is dangerous and not currently allowed under the Alert Level 3 restrictions in Auckland, says Lea.

“However, if you see someone in trouble and need the surf lifeguards, no matter where you are in New Zealand, call 111 and ask for Police.”