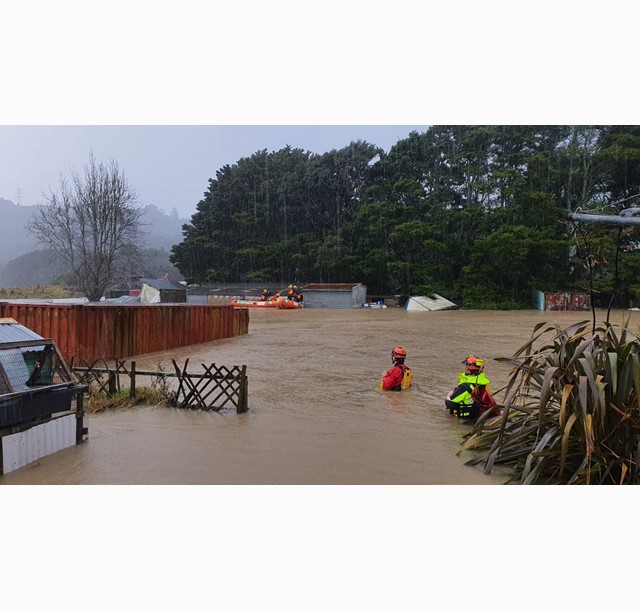 Lifeguards from two Surf Life Saving Northern Region clubs have been mobilised to rescue a number of residents trapped by flood waters in West Auckland.

SLSNR Search and Rescue (SAR) Supervisor John-Michael Swannix says five Muriwai Volunteer Rescue Service SAR squad members were called out around 5.30am this morning to assist two men trapped by flood waters at Tapu Road, Kumeu. Two IRBs were involved in the rescue, which saw one of the men assisted from the top of a shed, while the second man was trapped inside the shed and a window had to be broken to retrieve him.

The lifeguards were then called to three properties on Cane Road. A young man was rescued from a sleepout and reunited with his family. Welfare checks on the family and others on the street were carried out.

In a third callout, lifeguards checked on a woman and two children who were trapped on the second floor of their home on Matua Road. They have decided to wait until the floodwaters have receded.

Swannix says so far at least three people have been rescued and 10 others assisted. “Anyone who is in trouble should call 111 and ask for Police. They have a direct line to our Search and Rescue squads.”

SLSNR Chief Executive Matt Williams says the SAR operation again shows the many ways in which the community call on lifeguards’ skills, even in the most restricted lockdown environments.

“Previously we’ve seen lifeguards responding to many tricky incidents like the complex rescue of a surfer in lockdown earlier this year, and outside of lockdowns they continue to be tasked to all manner of critical incidents to save members of the community.

“These volunteers are an absolute national treasure. I really commend them; they’ve been up since the early hours saving the lives of people in their community, particularly with the additional challenges around COVID-19 alert Level 4.”