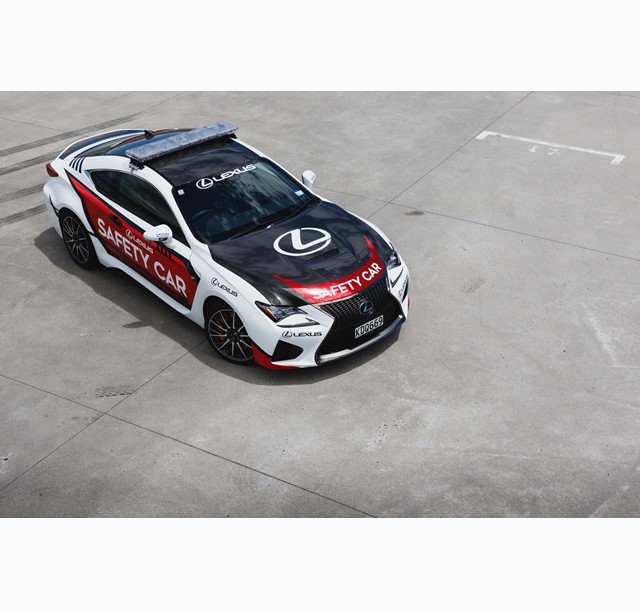 The 5 litre V8s will set the pace at the five rounds of the Castrol Toyota Racing Series starting at Ruapuna on the outskirts of Christchurch on Friday 12 January for a weekend of action.

They will also be on track at the other three meetings that have rounds of NZ's Premiere Motorsport Championship Series, starting with the 1st - 3rd December round in Taupo, as part of a partnership between Lexus New Zealand and Speedworks Events.

Lexus provided the same vehicles for the five Toyota Racing Series rounds last summer, but unlike previous years when the Lexus' were not always used for Course and Safety car duties, this summer they will precede every race on the programme.

"The Lexus model range has just as many performance cars and SUVs as we have hybrid electric vehicles," said Paul Carroll, General Manager of Lexus New Zealand.

"The LC500 V8 joins the GS F sedan and RC F coupe in Lexus' high performance line-up."
Mr Carroll said combining the performance of the electric motor and a petrol engine to its full potential in a hybrid model also produces sparkling performance.

Mr Carroll said combining the performance of the electric motor and a petrol engine to its full potential in a hybrid model also produces sparkling performance.

At the motor racing the RC F is used to lead competing cars on the parade warm-up lap before a race starts. It is also used to control the pace of the field under yellow flag situations during a race when course workers may be on the track retrieving a crashed car.

The GS F sedan has the same motor and is used as a Course car to check the track is clear and that all officials are in position, before the RC F leads the parade warm-up lap.

Both are more than capable of the job, being powered by a five litre V8 engine with 351 kWs and 530 Nm of torque.

The provision of the course and safety cars is all part of the Lexus Summer of Performance programme. From January through to March, Lexus holds track days on the Thursday before the Toyota Racing Series meetings at Ruapuna, Teretonga, Hampton Downs, Taupo and Manfeild.

Invited clients and potential customers for the Lexus range of high performance cars are able to drive on the track under controlled conditions under the watchful eye of experienced high-performance drivers.