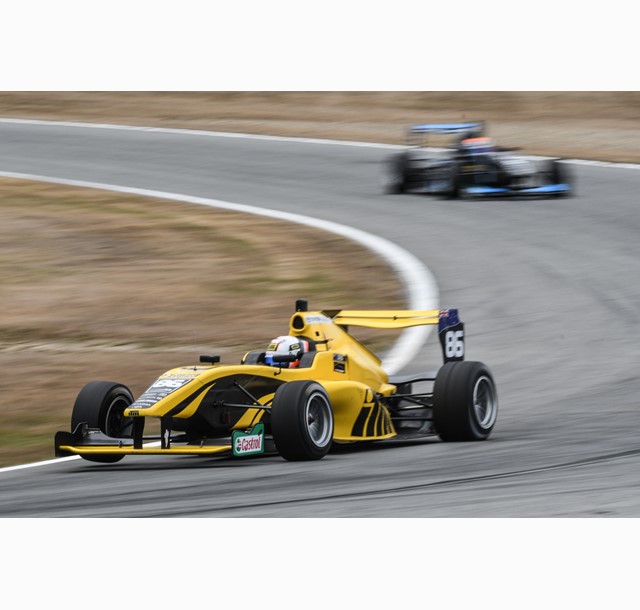 He was involved in a front straight accident at the start of the Sunday morning race last year with Austrian Ferdinand Habsburg that left his car severely damaged.

"It can't get much worse than that," said Leitch, who was forced to complete the main race after temporary repairs with a car that flexed because of a cracked engine block. "That was a pretty sketchy drive," he said.

After today's official practice sessions, Leitch was one of the fastest drivers on the southernmost race track in the world.

London based Clement Novalak who was born in France and brought up near Geneva in Switzerland had the fastest time of the day with a 53.647 seconds lap, followed by 18 year old Russian, Robert Shwartzman with a 53.671 time.

Leitch was fourth fastest with a 53.898 lap only six thousands of a second slower than Dutch teenager Richard Verschoor, who won the main race here last year on 53.892.

He used new tyres in the middle session of the day, while some of his rivals had fresh rubber in either of the other two sessions.

"I'm confident I've got the speed for a good qualifying time and pole position," said Leitch. "The car feels really good. I've just got to be very consistent in the races."

Three years ago Leitch won the main event, beating Canadian Lance Stroll who now drives for the Williams team in Formula One. And two years ago he was runner-up to Lando Norris from England who is now the McLaren team's reserve driver in Formula One.

First round winner Marcus Armstrong from Christchurch was sixth fastest, opting to do less testing laps during the three sessions. He was just behind Florida based Ecuadorian, Juan-Manuel Correa.

The top ten drivers were all covered by six tenths of a second, with Aucklander Reid Harker just shading Ryan Yardley of Christchurch in just their second race meeting in the class.

Pukekohe's Taylor Cockerton was 11th quickest after a quick trip to Malaysia during the week to test drive an Audi R8 with a view to a possible drive in Asian sports car events this year.

The rest of the Castrol Toyota Racing Series calendar is. -

Fastest practice times from all 3 sessions