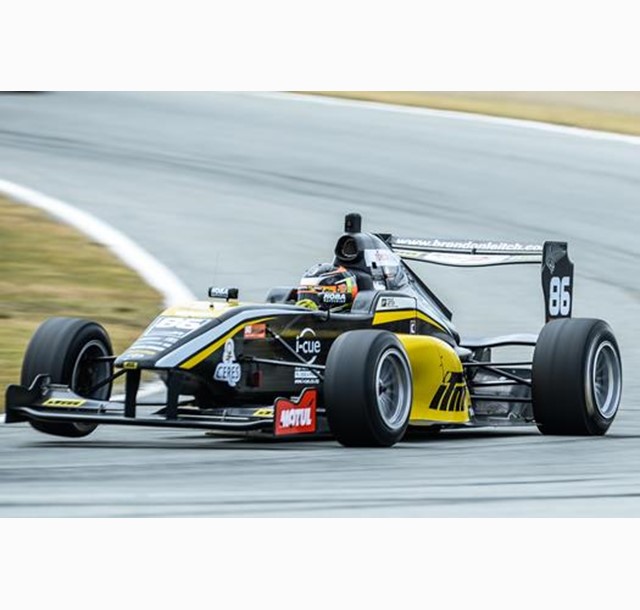 While many of the international drivers have been holidaying in the Queenstown area this week after the Teretonga round, Leitch has been back at work for three days before heading to Hampton Downs in the north Waikato for this weekend's racing.

The 20 year old who calls Invercargill home although he has lived in Cromwell for the last year lies fourth overall, just three points behind Austrian Ferdinand Habsburg.

Leitch has his eyes focused on a top three finish or better in the five round championship.

"I am just trying to be consistent, stay on the track and score as many points as possible."

His day job is as an apprentice mechanic at the Highlands Motorsport Park, where he also takes customers for hot laps in a range of exotic machinery.

Raising the finance for this summer's Toyota Racing Series was a long process and Leitch was the last of the 19 drivers to confirm his entry.

But for the first time he has a full budget and can use the maximum number of tyres at every round.

"Last year we threw more of our budget at our home race and won," said Leitch. "But then we did the rest of the series on the bare minimum. This year we have got the same resources for all rounds."

For the first time Leitch is working with an engineer, David Versalko, who has experience in GP3 in Europe, to analyse all the data available and set up the car in the best possible way. "The team is great and the car is really good," said Leitch.

His father Barry and long time mate George Keast who has worked on Leitch's cars since Formula Ford days are wielding the spanners.

But while he has good resources at his disposal, Leitch has been unable to make up for the track time his rivals have had in the last 12 months. Some of the internationals have raced a couple of dozen times, as well as undertaking test sessions.

Since last summer's TRS championship Leitch has had one outing in an elderly Formula Pacific car.

He admits his race craft has been a bit rusty. "I've made a few mistakes which has cost me places. It was better at Teretonga, although I still let Markelov past in one race. I've just got to use my head and not let cars behind get a look in."

After finishing runner-up to Lando Norris on his home track, Leitch is not concerned about what the North Island tracks will throw up.

"I've been on the pole or won races in Formula Ford at all three tracks (Hampton Downs, Taupo and Manfeild)," said Leitch. "We learnt the new car last year at all three places. Now we can go there and get on with it."

Leitch has hopes of attracting enough backing to head for the USA or Europe this year to tackle two or three meetings in either the Pro Mazda or Formula Three classes at $40,000 a meeting, "and see where it takes me."

But before then he is looking for more good results over the next three weekends to attract that backing.