‘Lean with us’ and support Emirates Team New Zealand 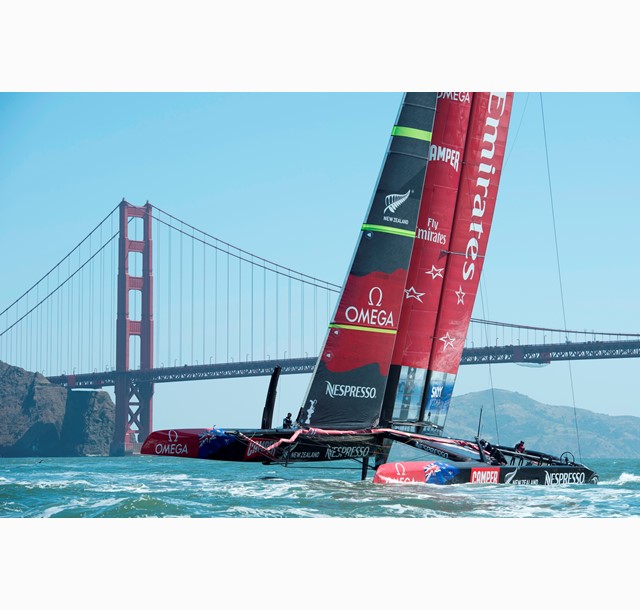 The 'Lean with us' campaign, announced today, will feature a nationwide tour and provide opportunities for all Kiwis to get involved either in their hometown or through social media.

Toyota General Manager of Marketing Neeraj Lala says the company is focused on generating nationwide support for Grant Dalton and the Emirates Team New Zealand crew as they gear up for the challenge in San Francisco.

"The campaign we have created is called 'Lean with us', and its overall aim is to bring New Zealand together and get behind Emirates Team New Zealand in a way that is fun and appeals to all Kiwis," Mr Lala says.

"'Lean with us' is a play on our boats' ability to foil at spectacular speeds.  We've taken the simple concept of 'leaning' (the first step towards foiling), which is fun and will appeal to all ages and turned it into a way for Kiwis everywhere to show their support for the team."

Emirates Team New Zealand Managing Director Grant Dalton is already a fan of the 'Lean with us' campaign. He's urging Kiwis to get into it and show their support for the team as they face their biggest challenge.

"When we go out on the water to race, there is nothing that will spur the guys on more than knowing they have huge support back home. It's no coincidence that our greatest America's Cup successes over the years have come on the back of nationwide support from Kiwis and that's what will make the difference in 2013. This challenge is tougher than ever before so we need New Zealand to 'Lean with us' and help us make the boat go faster."

One of the most innovative components of Emirates Team New Zealand's giant AC72 catamaran is the dagger board or foil and these are central to the 'Lean with us' campaign. Toyota has built two replica dagger boards to tour New Zealand from mid-June. The tour will give Kiwis the chance to sign the dagger boards and 'lean' their support to the team in official 'Lean with us' photos.  All photos from the tour will be uploaded to leanwithus.co.nz giving people the opportunity to share with family and friends.

"When the dagger boards are covered with the best wishes from people around the country, we will deliver them to the team in San Francisco. They will sit proudly at the base and remind the team every day that New Zealand is fully behind them," Mr Lala says.

Kiwis will also be able to participate in 'Lean with us' through an online competition that will invite people to submit their best leaning photo, share the photo with friends and family but ultimately show their support for Emirates Team New Zealand. A lucky winner and their partner will join the team in San Francisco for some close up action.

"We will use social media to connect Kiwis to all the live action in San Francisco and help make everybody feel that they are part of the action," Mr Lala says.

One of Toyota's key objectives is to connect the campaign to the wider New Zealand population and Mr Lala believes the online competition will go viral bringing Kiwis from all parts of the country together in support of Emirates Team New Zealand.

"Toyota has a rich and proud history with Emirates Team New Zealand which now spans 21 years," he says. "As Kiwis we are believers. We believe that if you can dream it you can do it, and that's why we're supporting this team. We believe 'Lean with us' has the potential to once again unite the nation in support of Emirates Team New Zealand.  It is the opportunity for the whole country to get behind the team and bring the cup home."