In a change to the championship schedule, eight races will be run over the next 13 months with both the 2018 and 2019 Le Mans 24 Hours race - the most famous endurance event in the world - making up two of the eight rounds.

Having ended last season as the fastest car, Toyota's goal is to finally win the unpredictable and arduous Le Mans 24 Hours as it seeks the WEC title. It is the one race in the championship which has eluded Toyota, even though it won the overall championship in 2014.

The team has left no stone unturned in its preparations for the series, which starts with a six-hour race at Spa in Belgium on Saturday 5 May.

It completed a successful pre-season programme which included 21,000 km of running over four, three-day tests and then 1000 laps of the Paul Ricard circuit in the south of France with the 1000 horsepower TS050 Hybrid.

Mike Conway, Kamui Kobayashi and José María López will drive one car while Sébastien Buemi and Kazuki Nakajima are joined by Alonso in the other.

While Toyota may be the only hybrid team in the LMP1 class it faces an unprecedented challenge to its hybrid electric technology as other non-hybrids will have 69% more fuel energy.

Fuel flow for the TS050 Hybrid is also restricted, to 80 kg per hour compared to 110 kg/h for the non-hybrid LMP1 cars, which are allowed to run 45 kgs lighter.

Kinetic energy recovery is a key factor in achieving those improvements, with energy generated under braking harvested by powerful motor/generators on both axles and converted into electrical energy, which is deployed under acceleration to save fuel and deliver performance.

That is the same principal which has seen Toyota establish itself as the world leader in hybrid electric road cars, selling more than 11 million to date. As part of continuing efforts to develop people as well as technology, road car engineers from Higashi-Fuji Technical Centre will again join the team to enhance their skills.

The 1,000 hp hybrid electric powertrain in the TS050 has been modified to improve reliability but elsewhere the car is largely the same as that which ended the 2017 season with three consecutive wins.

Small improvements to the aerodynamic package have been achieved within the rules while the 2018 car features a Gentex rear view camera, displayed on a screen inside the cockpit for the first time. 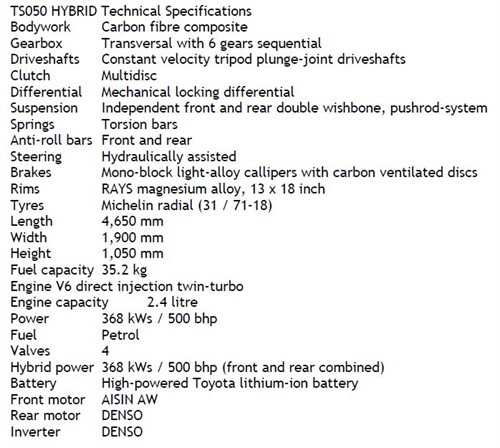