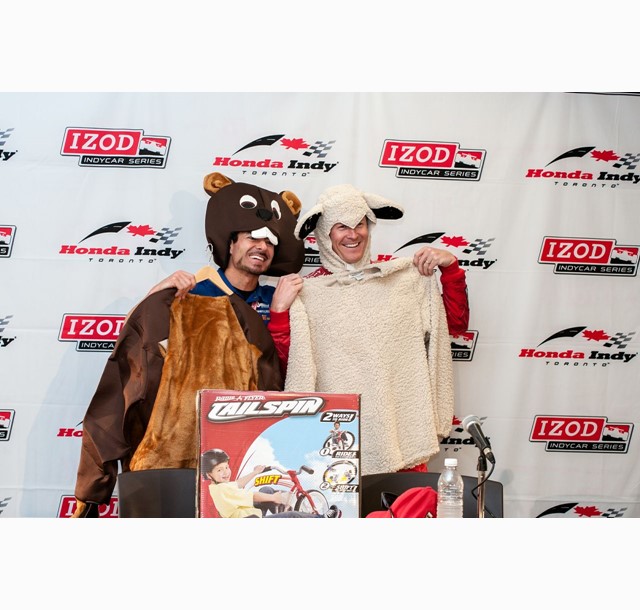 Following a winning weekend in Toronto and his third successive victory, Dixon is hoping to replicate his success off the track by taking the lead against rival racer Alex Tagliani as they compete to raise the most money for their respective causes. The pair are now on the home stretch, with donations for the Power of 2 celebrity challenge closing midnight this Friday (NZ time).

Dixon is raising funds in support of youth cancer charity CanTeen New Zealand and Teens Living with Cancer (US), while Tagliani is supporting Anaphylaxis Canada.

While their focus is set on raising much-needed funds for each of the associated charities, both will be quietly hoping to avoid having to complete the dare that has been laid down for the loser. Should Dixon fail to take the checkered flag, he will have to wear a sheep costume while riding a tricycle at the Indiana State Fair in August, while Tagliani would need to don a beaver costume, representative of his native Canada, if he cannot retain his lead.

Both drivers have been active on social media, interacting with fans and encouraging their support and have participated in a promotional event at Toronto Indy over the weekend where they showcased the costumes and tricycle.

CanTeen is encouraging Kiwis to go to www.power-of-2.org to donate to Dixon in support of young New Zealanders living with cancer before this Friday, 19 July. There's also something in it for the fans; every time you give or share the campaign of Scott Dixon's, you will earn an entry into a draw for a signed Dixon racing helmet and a personal phone or Skype call with him.

Dixon has been a strong supporter and Ambassador for CanTeen because he feels the 13 to 24 age group often gets overlooked.

"Often people immediately think of either helping children or adults, but young people are going through a lot at this stage in their lives. It's one of the most difficult stages of your life - even without the added difficulties of dealing with cancer.

"​It's cool to be a part of CanTeen as you can really make a big impact on young people.  It has been a very rewarding relationship for me over the years, and this initiative will only increase the exposure we are trying to create for them."

"The last challenge raised around US$30,000 dollars for the winning charity, which is a phenomenal boost for organisations whose work relies so heavily on charitable contributions. The funds raised by Scott will contribute towards the array of support services and care we provide our members," she said.

The fundraising initiative is dedicated to unlocking celebrity power for social good, but with the added catch of an embarrassing public stunt for the loser needless to say, neither driver wants to finish second.