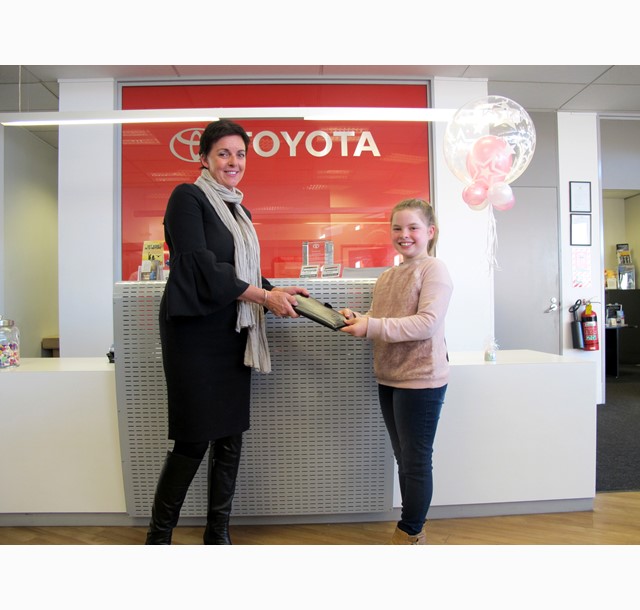 The Palmerston North school girl will get to take her parents to the home of Toyota for six days, including two days at Nagoya to visit Toyota facilities with other winners from the oceanic region.

Over 830,000 children from 79 countries submitted entries to their respective national competitions, which in New Zealand was run between last November and February 2017.

Sophie's work shows her vivid imagination with the title "Bee-Car Seed Library", which collects and sprinkle seeds world-wide to promote more plant growth on earth. Some seeds are funnelled to a library for future use.

"I am so excited to be off to Japan," said Sophie, "I have learnt an introduction speech in Japanese that I can share with my hosts."

"I can't wait to get to go sight-seeing in Tokyo and maybe eat at a bunny or owl café."

Sophie was competing in the 8-11 year olds section of the competition, which also catered for under eight year olds and 12 - 15 year olds, with hundreds of New Zealand children submitting entries.

Toyota New Zealand senior executives, guided by the CEO of Te Manawa Museum, Andy Lowe, judged the entries, with the top three in each age group being submitted to Toyota Motor Corporation in Japan.

Artworks were judged on three key elements - the message, the uniqueness and the art characteristics.

"When kids have a chance to imagine the future and improve the world their children will live in, there are no boundaries," said Andrew Davis, Toyota New Zealand's General Manager of Marketing.

"I loved Sophie's colourful interpretation of the theme and the bee's Learner plate, she really thought outside the box."

Sophie leaves for Japan on 28 August. Her trip will also include sight-seeing in Tokyo and Tokyo Disneyland before returning home.