How not to behave in meetings this year 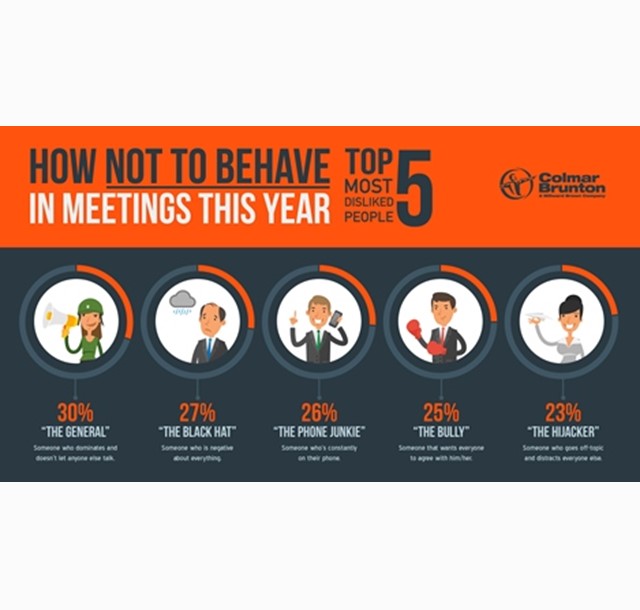 The research identifies the traits most likely to irritate in meetings with the worst offenders including people who dominate meetings by being the General, those who are negative about everything (Black Hats) and Phone Junkies who are more engaged in their mobiles than the meeting itself.

Colmar Brunton Account Manager Jessica Balbas says we all have our own meeting style, but if you want to earn the respect of your colleagues in meetings you may need to change your behaviour either a little, or a whole lot.

Ms Balbas confirms the General's dominance in meetings is most despised (30%), followed by The Black Hat's negativity (27%) with the Phone Junkie close behind (26%) in third place.

"Other pet hates include the Bully (25%) who wants everyone to agree with them, the Hijacker (23%) who goes off topic and distracts everyone else and the Chatterbox (23%) who talks too much and says nothing useful,'' she says.

When asked how to best describe themselves in meetings, most Kiwi workers thought they were Wallflowers (29%) which is someone who has nothing to say, followed by Fiddlers (13%) who can't stop playing with papers, jewellery and anything else they can get their hands on, or Eager Beavers (13%) who talk over others.

"Men (12%) are twice as likely as women (6%) to be the Nuclear Bomb in meetings - a person whose ideas silence the whole room," Ms Balbas says.

More women (32%) than men (26%) see themselves as Wallflowers, with women also more likely to be Eager Beavers in meetings.

"Let's not forget Parrots, disliked by 18% because they repeat others' ideas and claim them as their own; the Smarty Pants (13%) who is full of unnecessary jargon, Workaholics (3%) who spend their time in meetings working, or the irritating Pen Clicker," she says.

And finally there's The Snail (12%) who has no sense of urgency and is constantly late for meetings.

"The start of the new working year is a chance for Kiwis to take a good, honest look at themselves and change their meeting behaviour where necessary. Your work colleagues will thank you for it."

A representative sample of 1000 New Zealanders were surveyed and the survey has a maximum margin of error of + or - 3.1%.