Games volunteers will stand out in green and black 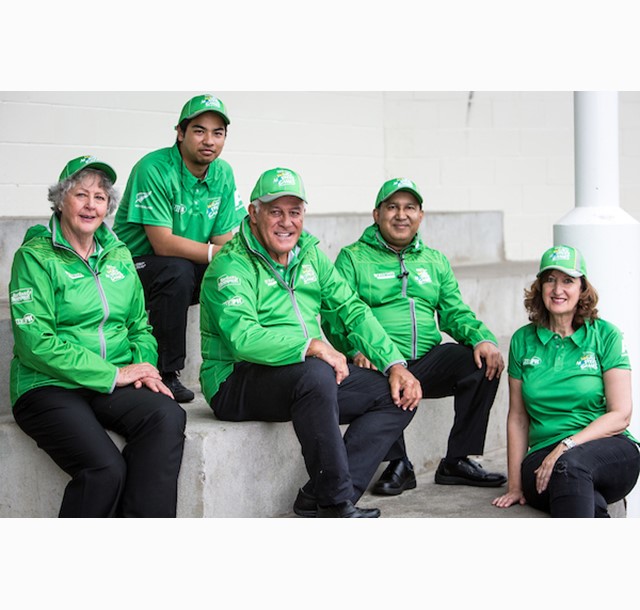 The WMG2017 volunteer uniform - including a bright green cap, polo shirt, all weather jacket and green and black backpack - was unveiled this week.

The volunteer workforce - to be known as the 'Pit Crew' - will be at the heart of the world's largest multi-sport event which is expected to attract 25,000 participants to Auckland and the Waikato.

Volunteers will be deployed at more than 50 venues including the 48 sports competition venues, the Opening Ceremony venue at Eden Park and the Games Entertainment Hub at Queens Wharf.

WMG2017 volunteer Ambassador and former All Blacks great Bryan Williams has already tried the uniform on for size and given it the thumbs up.

"The uniform is everything it should be - comfortable, functional and stylish," he says. "Importantly the uniform is highly visible and the design elements including the takarangi motif and distinctive green colour, also make it feel uniquely Kiwi."

WMG2017 Chief Executive Jennah Wootten says the uniform, developed by Project Clothing, will provide a quality, professional look and feel for the volunteers.

"I look forward to seeing our 4,000 Pit Crew volunteers wearing the uniform with pride and I hope they love it as much as we do."

The Local Organising Committee is closing in on its target of 4,000 volunteers but Ms Wootten says there are still opportunities for those who want to be part of making 2017 the best World Masters Games ever.

"We are still looking for Sport Crew volunteers to help deliver athletics, cycling, orienteering, triathlon and a variety of other sports," she says.

All volunteers will receive an official WMG2017 Volunteer Uniform which they can keep, a meal at each shift, training, access to free public transport to get to and from shifts and more.

Volunteers must be at least 17 years of age by 31 December this year, available for a minimum of four shifts during the Games (April 21-30, 2017), attend an in person interview, be subject to NZ Police vetting and cover their own travel and accommodation costs.

Registrations for World Masters Games 2017 competitors are also open. There's no need to qualify or be selected. As long as you are over the minimum age for your chosen sport, you can compete.

WMG2017 is the largest event New Zealand has hosted since Rugby World Cup 2011 and the largest the country will experience in the coming decade. Competitor registrations close early in the New Year and with some sports already sold out, organisers are encouraging athletes to sign up early to avoid disappointment.