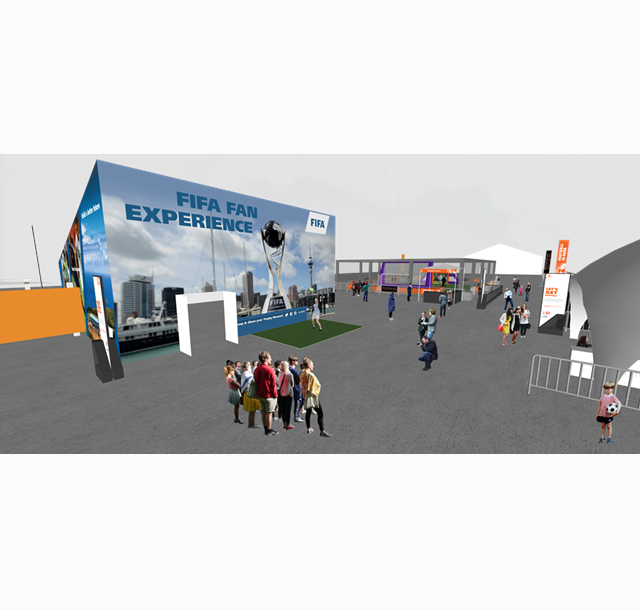 During Rugby World Cup 2011 Queens Wharf was home to Tourism New Zealand's giant inflatable rugby ball and for this tournament the FIFA Cube will be the star attraction on Auckland's waterfront.

Exclusive to Auckland and described as an experiential space, the FIFA Cube features digital displays, high tech skills stations, an information 'locker room' with information on the tournament and its history, football skills demonstrations and of course the opportunity for face painting in team colours.

The cube has been designed and built by FIFA specifically for the New Zealand hosted tournament and will not appear anywhere else in the country.

ATEED General Manager - External Relations, Steve Armitage, says the FIFA Cube and Fever Pitch should have similar pulling power to the giant rugby ball which attracted thousands of Aucklanders and visitors to the wharf.

"This is the second largest men's tournament in the FIFA stable behind the FIFA World Cup and will produce the best football ever seen on these shores. It's something to get excited about."

Across the road in Queen Elizabeth Square there will be more to tempt football fans from tournament sponsors (Kia and Rothbury) and Ticketek for match day ticket purchases.

Fever Pitch is open throughout the tournament from Saturday 30 May and entry is free.

That day also marks the start of Queen's Birthday weekend with a raft of free activities and entertainment to celebrate Queen's Birthday on Queens Wharf. From Morris Dancers to puppet shows, movies to vintage cars, there are plenty of British themed festivities on offer for the whole family.

Prior to the opening of Fever Pitch Aucklanders have the chance to be part of the FIFA U-20 World Cup 2015 action by attending the two official team welcomes in the city.

The New Zealand FIFA U-20 squad will be welcomed to the tournament at Aotea Square on Tuesday 26 May and Aucklanders are encouraged to come along and get behind the team at the event which includes entertainment and a chance to meet the players.

For more information on the FIFA U-20 World Cup action in Auckland and Fever Pitch please visit http://www.aucklandnz.com/fifaU20