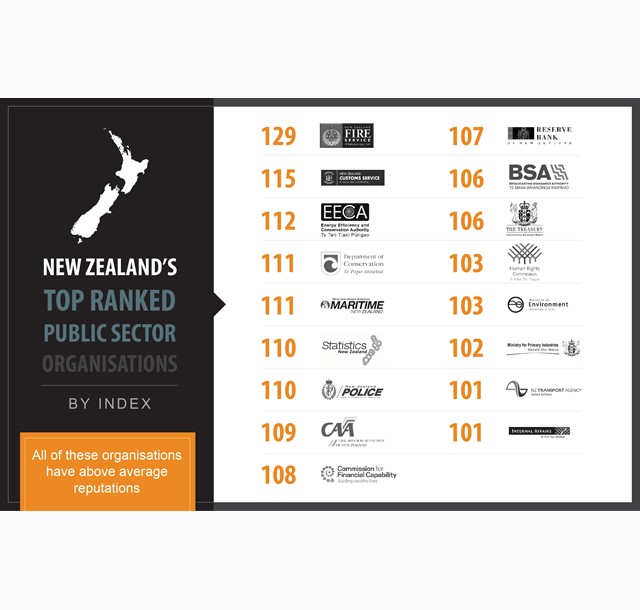 The New Zealand Fire Service has set the benchmark for public sector reputation in the most comprehensive research of its kind in New Zealand.

The Colmar Brunton Public Sector Reputation Index benchmarked 31 national public sector organisations against the four pillars of: leadership and success; social responsibility; trust; and fairness, with each entity's reputation indexed against the others.

"Our people have earned their reputation over time. It is one we are proud of and don't take for granted.

"Striving for excellence and a willingness to make personal sacrifices to keep our communities safe is what our people do every day."

The Fire Service outscored the rest of the field across all four pillars and the top 10 organisations demonstrated consistent strength across all pillars.

"People are twice as likely to speak highly of entities with a strong reputation and in turn they're rewarded by greater support and social license to operate. A positive reputation also helps to increase resilience to negative publicity," he says.

"The top 10 public sector agencies include some that have received significant and recent negative publicity.

"The results are most meaningful when interpreted in relation to other public sector organisations and the Index is a useful tool for organisations looking to improve their reputations."

The Index also identified strengths and weaknesses within the public sector overall, pinpointing priority areas for improvement as: openness and transparency; listening to the public; and using taxpayer money responsibly.

The Colmar Brunton Public Sector Reputation Index is based on the global RepZ framework, developed by Colmar Brunton's parent company, Millward Brown, and used in 40 countries.