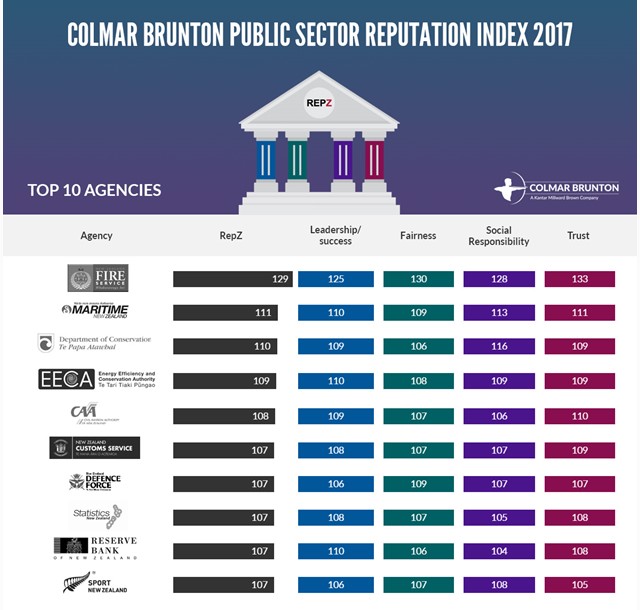 In results announced today, the Fire Service increased its lead on the rest of the field in the Colmar Brunton Public Sector Reputation Index 2017, the most robust research of its kind in New Zealand.

The Index benchmarked 39 national public sector organisations against the four pillars which contribute to reputation - leadership and success, fairness, social responsibility, and trust. Each entity's reputation was indexed against the others.

The Fire Service with a Rep Z score of 129 comfortably outranked the rest of the field across all four pillars. The research was completed prior to the February Canterbury fires.

Maritime New Zealand was a distant second on 111 with the Department of Conservation (110), EECA (109) and the Civil Aviation Authority (108) rounding out the top five. These are still considered to be strong scores against an average of 100.

Colmar Brunton Group Account Director Edward Langley says reputation is particularly important for the public sector because government departments and agencies are ultimately answerable to the citizens who fund them through taxation.

"A positive reputation maximises the opportunity to change people's behaviour; for example to encourage us to install smoke alarms, wear a life jacket for safe boating, protect our flora and fauna and insulate our homes," Mr Langley says.

"The other side of the coin can be illustrated by the likes of Brexit which occurred in part because EU policy makers were seen as too removed from British citizens."

He says reputation scores are strongly related to advocacy with people twice as likely to speak highly of organisations with a strong reputation.

In the 2017 Index, the Ministry of Business, Innovation and Employment was one of the fastest risers compared to last year, increasing its Rep Z score by six points to 103.

Other success stories included several organisations featuring in the survey for the first time this year, with the New Zealand Defence Force (107) and Sport and Recreation New Zealand (107) entering the Index in the top 10.

However, Mr Langley says almost half of those with above average Rep Z totals actually scored less than last year, with last year's second most reputable agency, the New Zealand Customs Service, dropping eight points to 107 and sixth place. The New Zealand Police and The Treasury both dropped four points.

"Each of those agencies retains an above average or strong reputation, which is very positive, but the movement in the Index is a timely reminder that no public sector can afford to be complacent about its reputation."

The Colmar Brunton Public Sector Reputation Index was launched in 2016 in response to an increasing demand from public sector agencies to understand how they are perceived in relation to others. It is based on the global RepZ framework, developed by Colmar Brunton's parent company, Kantar Millward Brown, and used in 40 countries.

The 2017 Index involved conducting 2,000 online interviews in November and December 2016. The survey was a nationally representative sample by age, gender, household size, income, ethnicity and region.