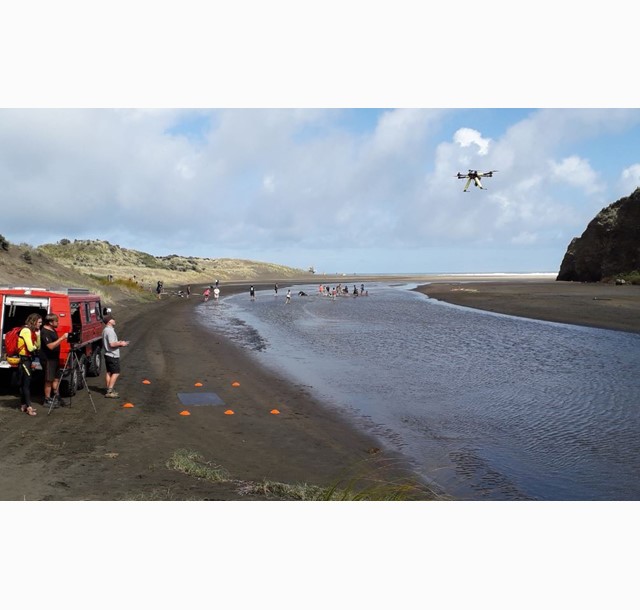 Both Sam and his jet-ski driver Willy Goer cruise the coastlines to survey fishers, gather data on fisher activity, and pass on valuable rock-fishing safety advice as part of a joint campaign aimed at reducing fatalities among the fisher population on Auckland's unpredictable west coast. But because jet-skis aren't suitable to operate in all conditions, a drone with an infra-red camera is being tested at Bethells Beach on Thursday 29 March at 12pm to help get the job done.

The drone camera will allow the operator to see "hot spots" - people - in variable light conditions from a safe flying height. Once the rock fishers are located, Sam can then decide the fastest and safest way to approach them depending on their location. Sam hopes the drone will be more effective at spotting fishermen who are in hard-to-reach places, as some are often perched on rocky outcrops and ledges.

"It'd be great to have a better idea of the rock fishers' whereabouts before clambering out to give them safety advice," he says.

"Being able to see where the fishers are, before I spend time getting out to where I think they are, saves me time, but it also makes it safer because I'm not putting myself at risk only to find no-one is there."

Saving Northern Region and Auckland Council - to raise awareness about the risks involved with fishing off the rocks.

One of the key messages is to always wear a life jacket regardless of the conditions, and Surf Life Saving Northern Region Operations Manager, Adam Wooler, says that it only takes one rogue wave to dislodge a person.

"Wearing a lifejacket may mean the difference between life and death, and every incident on the rocks doesn't just put the person in the water at risk - it also poses a risk to others trying to assist them, including our lifeguards," he says.

While the project is aimed at rock fishers mostly, Drowning Prevention Chief Executive Davin Bray says that they also appeal to families of the (mainly) men who fish off the rocks. "We want you to urge your fathers, husbands and sons to act responsibly, especially around wearing a lifejacket so they get home safely at the end of the day," he says.

The joint campaign has made a significant impact on reducing the number of drownings and influencing behaviour change but Auckland Council's Parks, Sports & Recreation General Manager Mace Ward says there's more work to do as some fishers continue to place themselves at risk by choosing not to wear a lifejacket. "The west coast is a dynamic environment that requires respect in order to stay safe," he says.

The Drone is currently being evaluated by Surf Life Saving Northern Region and X-Craft, a local UAV specialist company and leader in this new technology.