Driving us crazy – the tailgater, the non-indicator and the texter 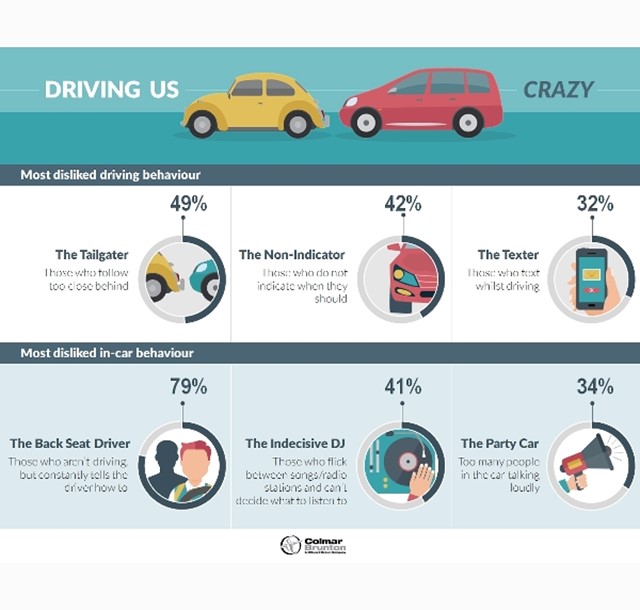 Colmar Brunton recently polled New Zealanders on driving etiquette including the most annoying habits of other drivers, how drivers on our roads compare with those in other countries and whether those surveyed considered themselves guilty of any of the most despicable driving misdemeanours.

Tailgaters were the most likely to get other drivers' blood boiling with half of those surveyed including them in their top three most disliked driver types and just over a fifth (21%) considering them the worst of all. But non-indicators and texters weren't far behind. A total of 42% put non-indicators in their top three, followed by texters on 32%, crawlers on 28% and cellphone callers on 26%.

Colmar Brunton CEO Jacqueline Farman says the survey results indicate Kiwi drivers find it a lot easier to identify shortcomings in other drivers than in themselves, as is human nature.

"When confronted with a list of fairly common annoying driver behaviours, half of those surveyed claimed none of these described their own driving."

"Those over 40 years old are less likely than younger drivers to admit their faults which could be interpreted as the older generation thinking they are okay but disapproving of the way younger drivers behave on the roads."

A total of 38% said Kiwis are worse drivers than their counterparts overseas with just 21% of the view that drivers here are superior. The over 40s were once again the leading group of critics.

"This could be down to their additional exposure to drivers in other countries over a longer period of time or it could be prompted by their observations of the evolution of New Zealand driving if they believe it has got worse over time."

Interestingly, those who classed themselves as crawlers were a lot more likely than other drivers to think that New Zealand drivers are better than overseas while switcheroos (drivers who constantly switch between lanes) are most likely to think we are worse than overseas drivers.

Mrs Farman says driver dislikes are to some extent defined by the way they themselves drive.

"Crawlers are significantly more likely than other drivers to dislike tailgaters while those who admit to not indicating or texting while they drive are far less likely than most to see these as annoying behaviours."

The survey asked about the top three most annoying in car behaviours for drivers or passengers. Not surprisingly the back seat driver was in the top three for almost 80% of those surveyed. Indecisive DJ's followed a distant second and partiers (too many people in a car talking loudly) rounded out the top three.

When asked to say which three types of driver they most dislike, the 10 most popular responses were as follows.

The tailgater (someone who follows too close behind you)   49%

The cellphone caller (someone who talks on their phone)     26%