Does what it means to be a Kiwi depend on where you live? 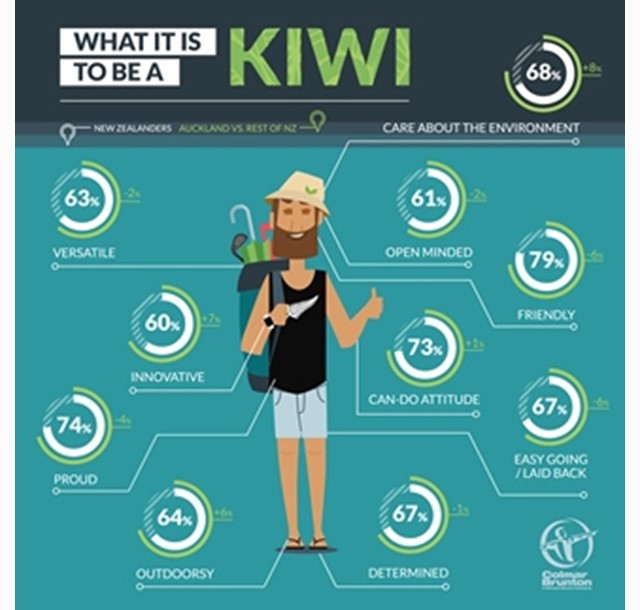 Colmar Brunton survey data, just released ahead of Waitangi Day, captures how New Zealanders perceive the attributes and beliefs which shape our country and what it means to be a Kiwi.

CEO Jacqueline Farman says while Auckland and the rest of New Zealand are not poles apart, there are some interesting differences in many areas.

"Kiwis' core values are consistent with the last survey in 2013 with the exception of a marked increase in concern for the environment they live in, which has jumped from 60% in 2013, Ms Farman says.

"That's in line with other studies such as our Better Futures report which shows a strong trend of Kiwis being increasingly influenced in their behavior by environmental factors."

Caring about the environment is even more pronounced among Aucklanders who are 8% more likely to care for the environment than Kiwis generally - and it's not the only difference.

"Fewer Aucklanders than those living in other parts of the country identify themselves strongly as Kiwis, which is not surprising given the large migrant population in Auckland," Ms Farman says. "What is a little surprising is that even amongst those born in NZ Aucklanders are slightly less likely than others to strongly identify themselves as Kiwis."

Aucklanders also see themselves as more outdoorsy (+6%) than the rest of the country more innovative (+7%) but less friendly (-6%).

"Aucklanders may well be showing they value the outdoors as an escape from the stress of super city life and therefore are sensitive to any threat posed to that environment," Ms Farman says.

When it comes to what Kiwis are proud of, natural beauty (90%) tops the list followed by easy access to outdoor pursuits (84%), can-do attitude (71%) sporting achievements and laid back lifestyle (68%).

"Unsurprisingly Aucklanders are more proud of New Zealand's cultural diversity, reflecting the city's ethnic make-up. But interestingly the city has a stronger pride in its Maori culture than the rest of the population."

Fifty per cent of Kiwis say they are proud of the country's cultural diversity (+4% for Aucklanders) while culture such as the haka and Maori culture in general made 48% of the country proud, compared to 55% of Aucklanders.

The high cost of living is seen as the biggest barrier to New Zealand's success, especially in Auckland, where 60% see this as holding New Zealand back from its full potential.

The majority of Aucklanders (55%) would stay put if cost of living and employment opportunities were equal throughout the country. But only14% of those living elsewhere in New Zealand would choose to move to the big smoke.

When asked to look to the future, New Zealanders say they have less confidence in being able to achieve goals and aspirations compared to 2013. A total of 74% believe they will own their own home within the next 20 years but that figures drops to 69% for Aucklanders.

However those who live in our biggest city see themselves as more likely than other Kiwis to own a business, be famous, travel abroad or get married.

A representative sample of 1000 New Zealanders took part in this online survey which represented a national spread of age, gender and region and has a  margin of error of + or minus 3%.