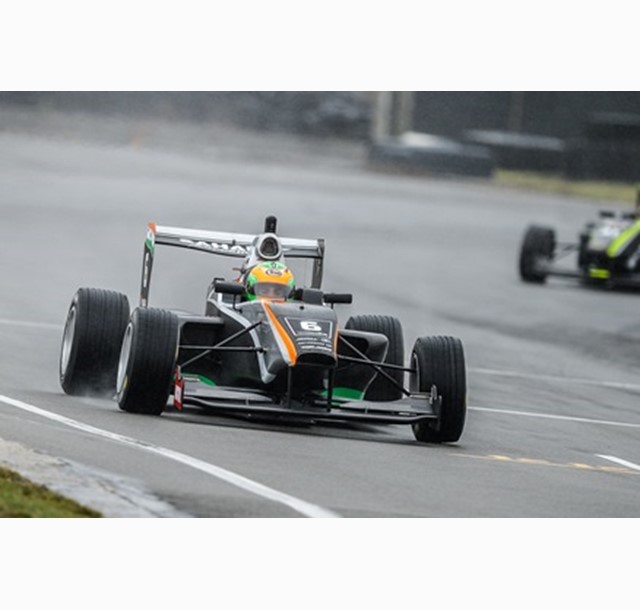 Indian driver Jehan Daruvala was a bemused winner of the Lady Wigram Trophy race, the main event of the first round of the Toyota Racing Series at Ruapuna this afternoon.

"The team was telling me to box (come into the pits)," said Daruvala after taking the race which finished behind the safety car after cars had stopped in dangerous places after spinning off the track.

"I asked if they were sure and they said yes. It was definitely the right call to change to wet tyres when we did."

The whole field had started on slick tyres despite the damp conditions which became more treacherous as drizzle continued to fall.

After starting 17th on the grid and racing in the middle of the field, Daruvala's team elected to bring him into the pits to change tyres in the expectation there would be further incidents on the increasingly greasy track.

It was the right call as the safety car was called out a second and third time.

On the third restart Daruvala had only one other car on wet tyres in front of him, Pedro Piquet, who became involved in an incident on the track and spun off.

The first eight led by the morning race Lando Norris (England) were still on slick tyres and became sitting ducks in the conditions.

Daruvala with more grip in the conditions was able to pass Norris and Artem Markelov (Russia) to take the lead just two laps before another incident brought the safety car out again and the race was stopped.

"I've got to thank the team a lot," said Daruvala. "It's my first victory in cars."

Like Saturday's winner Ferdinand Habsburg who started 16th and finished second this afternoon after an early stop for wet tyres, Daruvala's last win came in karts in 2014.

"Those restarts were tricky," said Daruvala. "I couldn't see much in all the spray."

He goes to the second round at Teretonga, Invercargill next weekend, fifth on the points table, which is led by Norris, from Habsburg and Markelov.
Simon Evans and Andre Heimgartner, both in Commodores, shared wins in the supporting V8 races, while Ash Blewett extended his lead in the Toyota Finance 86 series with two more wins.


The full TRS schedule is.-