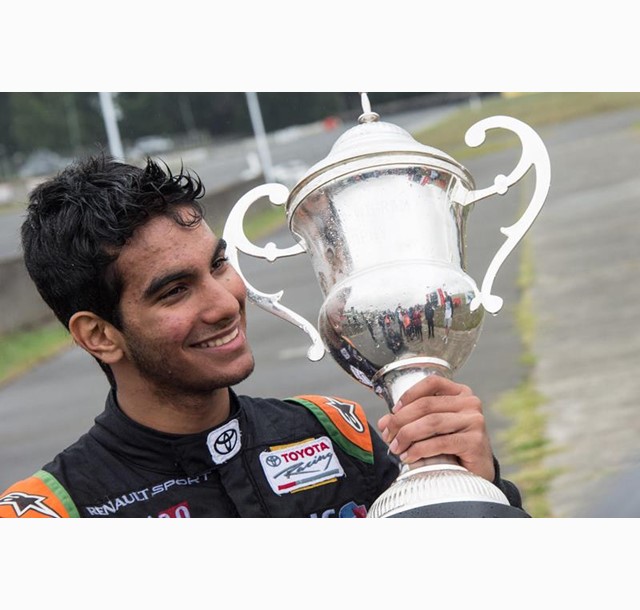 Eighteen year old Daruvala finished runner-up in the championship to Britain's Lando Norris last summer and headed off to Europe for a season of racing in Formula Renault.

But the results weren't as good as he and his backers, the Force India Formula One team, expected. After 30 races Daruvala came fourth in the Northern European Cup with a win and four podiums, while in the main European Cup he had to be content with ninth overall and just one podium.

"The results were definitely not up to my expectations. I was hoping for more podiums and wins and to finish higher in the championship standings than fourth and ninth," said Daruvala from his Mumbai home.

He said his team-mate Lando Norris was very quick right through the year, on all tracks and in all conditions. "I felt that with the pace I had shown in practice and qualifying, I should have been fighting for top three in the championships."

So Daruvala is returning to New Zealand for the second time inside 12 months for the five round, 15 race series which finishes with the New Zealand Grand Prix at Manfeild near Palmerston North on February 12.

"I enjoyed New Zealand at the start of 2016, said Daruvala "It is an excellent series to do in our winter and will help me gain more experience before a big step up to F3 next year."

Daruvala believes he needs to improve his driving in the wet, which is somewhat ironic, as he won the Lady Wigram Trophy Race at Ruapuna last January in track conditions that changed from wet to dry.

"When I have a bad qualifying and I am trying to make my way up through the pack in the races, I have had a few unnecessary tangles with other drivers which has cost me dearly. I have to adapt my driving to make sure that I avoid incidents."

Daruvala, like last year, will again drive for the Hamilton based M2 Competition team and use a Tatuus single seater, powered by a 1.8 litre Toyota engine producing about 145 kWs running on an 85 percent ethanol bio-fuel. All cars use the same Michelin tyres, gearbox, suspension and brakes to provide as close as racing as possible, with driving skill being the deciding factor.

The full schedule is: