Over the weekend – when Kantar ran our ninth survey wave to gauge the attitudes of Kiwis to the Covid-19 situation – New Zealanders were eagerly awaiting the news about if and when Alert Level 2 would come into force. It now been confirmed by the Prime Minister that we will indeed be moving into Alert Level 2 from Thursday this week.

Consumers’ and citizens’ sentiments continue to change rapidly, and Kiwis who ventured out in the weekend would have noticed busier roads, longer queues at retailers that were able to operate under Level 3, and more of us enjoying the outdoors.

Before today’s announcement, the majority of New Zealanders Kantar surveyed over the weekend believed that we should enter Alert Level 2 this week, while one quarter of us were comfortable with whatever the Government recommends.

What was clear is that many Kiwis are still wary about Covid-19 and do not want to rush out of Alert Level 3 – almost one-third of Kiwis believe we should wait until next week, or longer. This group outstrips the number of New Zealanders – one-in-eight – who think the Government should have moved to Alert Level 2 earlier. 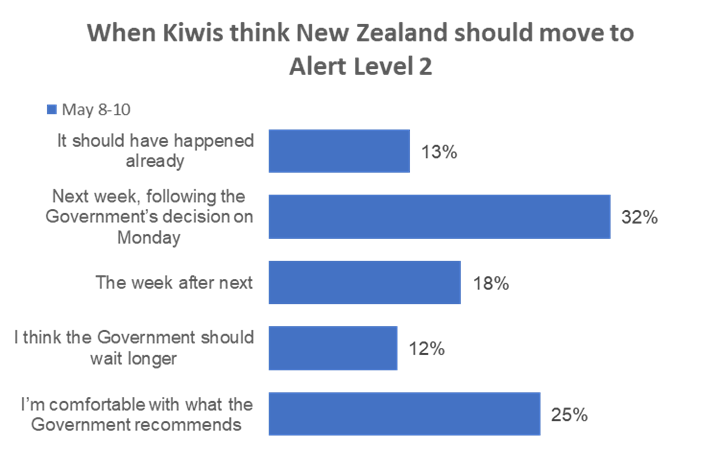 Over half of Kiwis agree with the Level 2 restrictions

Last Thursday, the Government announced what will and won't be allowed at Alert Level 2 and, what continues to be a current theme, the majority of New Zealanders agree with all of the restrictions which will come into force this Thursday, fewer than one-in-ten disagree with them, and just over one-third agree with some of the restrictions. In our end of week round-up – which provides more in-depth insights to understand the impact that Covid-19 is having on Kiwis – we will provide more details on what it is that New Zealanders don’t agree with. 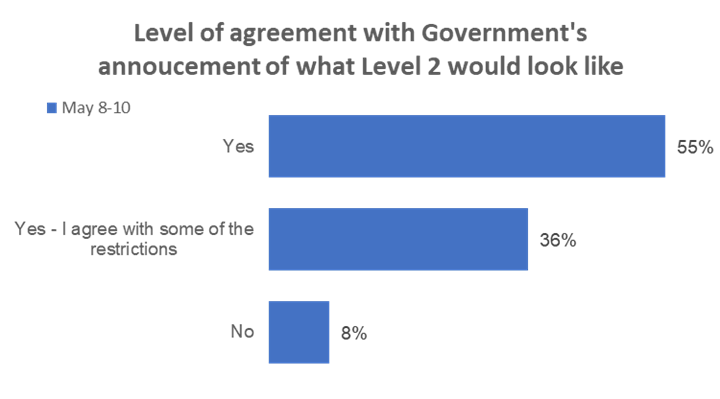 Concerns about financial planning and a global recession on the rise

As we have previously reported, the issue Kiwis describe as being their biggest concern, when it comes to Covid-19, has consistently been the financial impact of the pandemic – particularly the impact of Covid-19 on the New Zealand economy and job security. What is evident over the last week – and no doubt a reflection of fewer cases – is less Kiwis saying that the physical health of themselves and their family, and well-being of the people in their family who are vulnerable to Covid-19 is their main concern.

What we have seen is an increase of Kiwis whose main concern is financial planning for the future – which is no doubt due in part to further job losses being reported, such as SkyCity announcing 700 more jobs are likely to disappear due to Covid-19 – and a global recession (which could be attributed to countries such as the US and UK struggling to manage the situation). 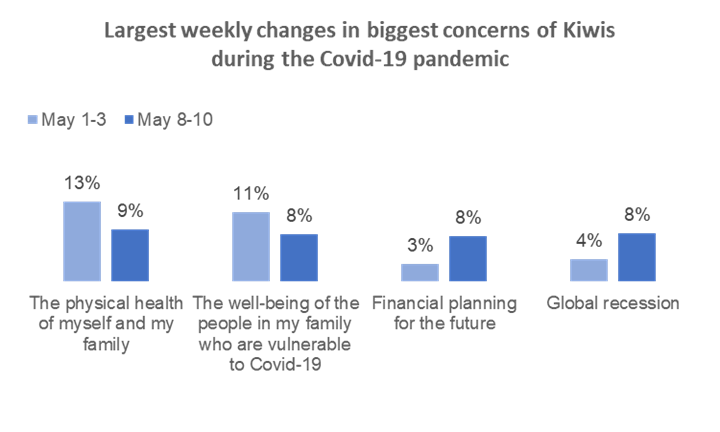 On 27 April, it was reported that the Ministry of Health planned to make a voluntary app available in the next fortnight to track the movements of people with the virus. This has yet to be introduced and, while countries like Singapore and Australia deployed Bluetooth-based tracing apps as a central part of their Covid-19 responses, the Prime Minister has previously emphasised that she is sceptical about the effectiveness of an app, noting that it would require high uptake.

We have asked Kiwis how comfortable they would be sharing personal data for contact tracing, if it meant that a nation-wide lockdown could be avoided in the future. While the majority of New Zealanders are still be comfortable with this, the number of Kiwis not comfortable has risen over the last six weeks.