Charities line up for new Corollas 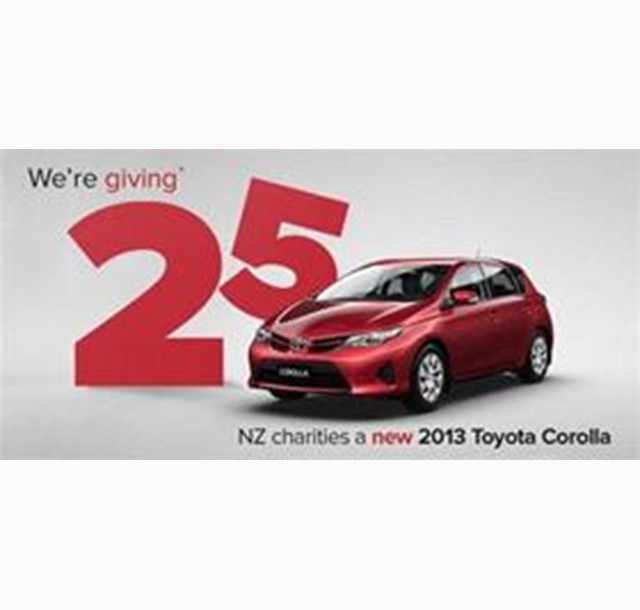 With a busy start to nominations and more coming in, those putting their names forward include everything from sports clubs to environmental groups. There are 73 community and social service charities nominated followed by health (64) and education and research (48).

There is a wide range of suggested uses for the Corollas from the nominated charities. Everything from transferring volunteers to remote conservation projects, to transporting abused or neglected children to appointments, carrying rescued animals to the vet, and taking children to church groups when they have no other means of getting there.

Mr Lala is encouraging more charities to get involved and nominate themselves as soon as possible. "With 25 cars up for grabs, there is a pretty good chance that even small charities will receive one to aid the great work they do for Kiwis," he says.

New Zealand registered charities can nominate themselves at www.25waystosaythanks.co.nz/charities any time between now and 24 March.

The public can browse the profile pages for each nominated charity at www.25waystosaythanks.co.nz and vote for their favourite.

Mr Lala says it is fitting that the public will decide where the 25 new Corollas will go.

"25 Ways to Say Thanks is Toyota's way of thanking New Zealand communities for their loyalty over the past 25 years so it makes sense that the New Zealand public should get to decide who will receive the cars," Mr Lala says. "We urge Kiwis all around the country to get in behind their favourite nominated charity and vote to support the fantastic work they do in our local communities."

Voting remains open for four weeks and closes on Sunday 24 March. The winners will be announced during the following week.