Charities in line for a free ride 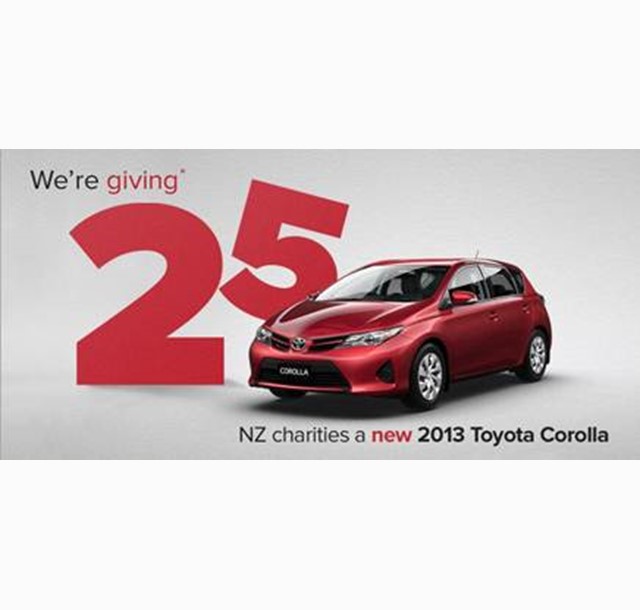 Everyday Kiwis will decide which 25 lucky charities will receive a new Toyota Corolla to use for three years. Registered charities or community groups from anywhere in New Zealand can nominate themselves and the public will have the opportunity to vote through Facebook over a four week period.

More than 130 of the country's 25,000 registered charities put themselves forward within 24 hours of nominations opening this week, with hundreds more expected to enter over coming weeks. To be eligible to receive one of the 25 vehicles for three years, charities must have registered charity status in New Zealand, and they can nominate themselves by visiting www.25waystosaythanks.co.nz.

Each nominated charity is then provided with a profile page on Toyota's "25 Ways to Say Thanks" Facebook app, to tell the public who they are and why they need a new Toyota Corolla. From Monday 25 February everyday Kiwis will be able to browse the charity profile pages and vote for their favourite.

Toyota New Zealand CEO Alistair Davis says the "25 Ways to Say Thanks" initiative is the company's way of thanking New Zealanders for their loyalty over the past 25 years.

"Communities throughout the country have embraced Toyota and the charities in those communities are the ones doing valiant work, often with minimal resources. We want to lend them a helping hand and say thanks to all of New Zealand."

2012 was the 25th year in a row that Toyota led the market in new car sales in New Zealand. The company has sold more than 430,800 new vehicles over the past 25 years.

"It's clear to us that when Kiwis find something they love they stick with it," Mr Davis says. "We are humbled by the loyalty and trust New Zealand communities have put in our vehicles during the past quarter of a century. Without the support of our loyal customers we wouldn't be where we are."

Nominations for "25 Ways to Say Thanks" are now open at www.25waystosaythanks.co.nz for New Zealand registered charities. Voting begins on Monday 25 February and closes on Sunday 24 March. Winners will be announced in the week commencing Monday 25 March.