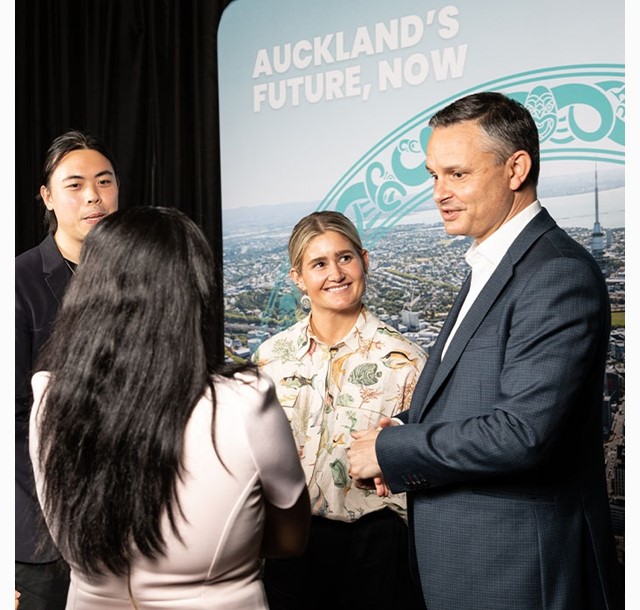 A call from international cities advisor Greg Clark for Auckland’s city centre to become its social centre and a call from Te Aroha Grace of Ngāti Whātua Ōrākei for Tāmaki Makaurau leaders to be ‘mana economists’ were two of the many inspiring ideas to emerge from Auckland’s Future, Now.

Organised by Tātaki Auckland Unlimited, the region’s economic and cultural agency, the third Auckland’s Future, Now event put the spotlight on the challenges and opportunities Tāmaki Makaurau Auckland faces. Nearly 40 speakers and panellists shared their thoughts on what the region collectively needs to do to build a resilient, inclusive and equitable future.

The day started with a mihi from Te Aroha Grace, nephew of the late, great Ngāti Whātua Ōrākei leader Joe Hawke, challenging the economic, business and youth leaders and thinkers in the room to be ‘mana economists’ for the region, following the lead of his uncle – who passed away on Sunday, 22 May.

Many speakers paid tribute to Joe Hawke including Auckland Mayor Phil Goff, who on opening the conference, recognised Hawke as “a man of great vision and commitment to our region”.

Mayor Goff also focused on the need for Auckland’s leaders to plan for the long-term while continuing to address the immediate challenges facing the city. He said two immediate focuses were to advance the city’s recovery from COVID-19 disruption, particularly the city centre, and to take urgent action to tackle the climate crisis.

International cities advisor Greg Clark highlighted the appetite for a new social contract and a new role for cities. “Our cities are becoming places to live, to have experiences, to be creative. The experience of cities will be the face-to-face, and the face-to-place that can’t be replicated online,” he said.

“Our city centres will be central social districts. The value of strong, resilient cities is being recognised by nations around the world – the role their economies play serving the nation and their role as the nation’s gateway for investors, entrepreneurs, visitors and migrants to the whole country.”

A panel discussed solutions on issues related to the city centre, which is the fifth largest economy in New Zealand in its own right. Smart cities expert Mark Thomas, Committee for Auckland, said the challenges the city centre is experiencing through the pandemic present the opportunity for a nimble approach, linking COVID-19 solutions to help address long-term issues.

“We can see what’s happening overseas – we see that once you start to open and get tourists back, particularly – cities come back to life. We’ve got big alignment around the development plan for the central city, we just need an action-focused group to get more done, more quickly and I think that’s the opportunity,” says Thomas.

Tātaki Auckland Unlimited Chief Executive Nick Hill said the quest for Auckland’s Future, Now was to think about how the Auckland region can be reimagined. “The Koi Tū report Reimagining Tāmaki Makaurau Auckland has given us the starting point and the framework to have that conversation for Auckland – and it sparked good discussion in the conference room.”

Some of the strongest challenges came from rangatahi. FENWICK founder Izzy Fenwick noted that if we don’t think about and engage with the needs and expectations of future generations in Tāmaki Makaurau Auckland, those future generations will find cities that do.

Nick Hill said young people have the ‘superpower’ of rapid adaptation to rapid change, particularly emerging technologies, and their technological local and international connectivity is exactly what our south Pacific city needs.

“New Zealand – and Auckland in particular – is bursting with next generation talent. Nowhere is that more apparent in south Auckland, which has the youngest demographic make-up of any area in New Zealand – 40 per cent of the population is under the age of 25 compared to 32 per cent for the rest of New Zealand,” says Hill.

Hill said Auckland’s Future, Now speakers were unanimous that “our diverse population – our people – is our strength – as the largest Māori city in the world, for intergenerational solutions, for our creative industries and innovation, and the unique experiences that can be had only here”.

Auckland Council General Manager Community and Social Innovation Tania Pouwhare noted: “Our recovery and the climate challenges now with us cannot further exacerbate our entrenched inequalities and fall hardest on our Māori, Pacific, south and west communities who have already paid heavily through the global financial crisis and pandemic.”

EMA Project Manager Trina Tamati, who joined Pouwhare on a panel examining the region’s Māori economy, said Māori needed a place at the table, and cited the recent Activate Tāmaki Makaurau support package for small businesses – funded by the Government and delivery lead Tātaki Auckland Unlimited – which was co-designed with Māori partners and was a success story of delivering support where it mattered.

Also repeated loudly and clearly throughout the day was the urgency to look out, travel and reconnect with the world. Iron Duke Partners Managing Director Phil O’Reilly said Auckland’s business and civic leaders need to reforge relationships and forge new partnerships locally, nationally and internationally to remind everyone Auckland is here, open for business and ready to retake our place on the world stage.

Auckland Airport General Manager Aeronautical Commercial Scott Tasker highlighted that Auckland Airport, the gateway to New Zealand, is only at 30 per cent pre-COVID-19 capacity. He said the country is falling behind in reconnecting to the world, and that many more airlines and routes must return to ensure tourism and trade bounce back.