“Best birthday ever” for Beachlands 7-year-old 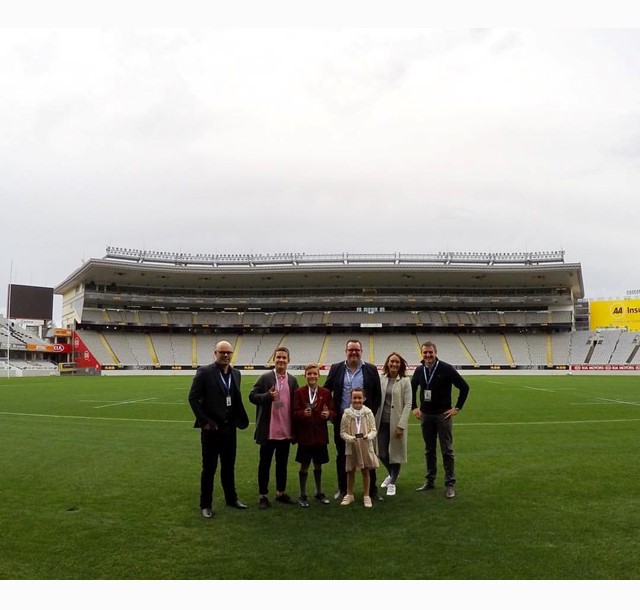 Management consultant Chris Broadhurst shared his Eden Park story on Facebook as part of Eden Park's 'Our Neighbourhood' golden ticket competition and was the lucky winner.

First prize was a 12-month Eden Park membership for four people, but with the Broadhurst family numbering five - Chris, wife Amy and children Saatchi (13), Preston (11) and Vittoria (7) - Eden Park didn't hesitate to add a fifth membership to the prize pack.

Chris's Eden Park story was about the special night last year when he took his 66-year-old father to his first ever All Blacks match and first ever match at Eden Park.

"I've been lucky enough to go to a few All Blacks games at Eden Park over the years but to be there with Dad and my two sons - the three generations of us - in the middle of a sellout crowd at fortress Eden Park was an amazing thing, especially for Dad to be part of it for the first time."

He says last Tuesday night was another very special Eden Park experience for the family, witnessing the Blues historic 22-16 victory and enjoying dinner in the members' lounge before the game for the first time, on what daughter Vittoria described as her "best birthday ever".

Meanwhile son Preston (11) is on the fast track to playing on Eden Park. He has already represented New Zealand at tag rugby and Auckland at touch rugby, and attends King's School on a scholarship, having caught the eye of King's College rugby scouts.

"Friday night for our family is all five of us gathered around the TV watching Super Rugby so to be able to experience the games live at Eden Park is fantastic," Chris says.

Chris grew up in Taupo but is a long-time Blues fan who made his first visit to Eden Park in for the Blues' first ever home game in 1996.

He's impressed with what he sees as Eden Park turning into "a really cool family atmosphere."

Eden Park Chief Executive Guy Ngata says the Eden Park team are certainly looking to add personality to the venue and make it more people friendly, which is what the 'Our Neighbourhood' project is all about.

"There are so many people and families with generations of connections to Eden Park and stories to tell. Celebrating them is a way of celebrating Eden Park's story," he says.

"We're delighted to welcome the Broadhurst family and help them add to their Eden Park stories."

The centrepiece of the 'Our Neighbourhood' project is recently launched photographic exhibition, which now adorns the walls and halls of Eden Park. It combines stunning, large scale portraits by local photographer Lee Howell with the stories from some of the many individuals who make up the stadium's community.

The exhibition is a celebration of community, place and a passion for sport through the eyes of Eden Park's team, supporters, local businesses and neighbours.