Baby Boomers – ready or not for retirement? 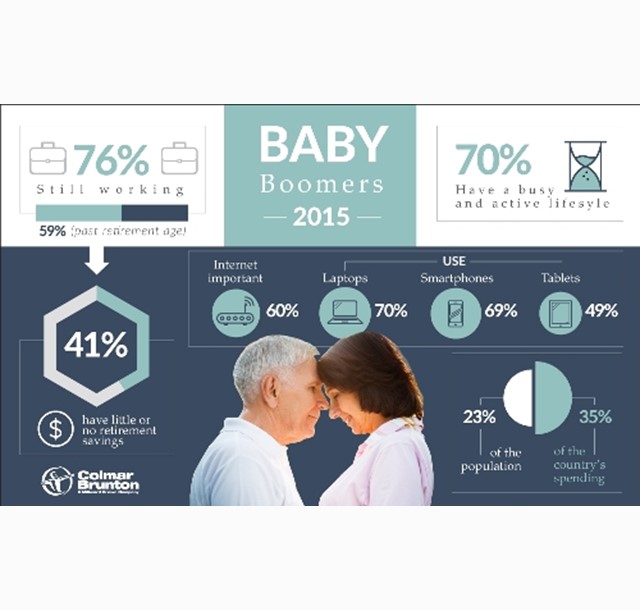 The findings come from a major Colmar Brunton research project into the country's baby boomers, those born between 1946 and 1964, who are our largest generation and the one supposedly gearing up for retirement.

"We often think of baby boomers as all being relatively well off and cruising towards early retirement but that's not the case for many," he says.

"Boomers across the board certainly aren't as wealthy as we might think. Almost half are on incomes up to $50,000 a year and a quarter make do with total household incomes at that level."

At the other end of the scale a third have combined household incomes of more than $100,000 and a third have savings or investments of $100,000 or more.

"It's clear there are some baby boomers who are relatively wealthy and asset rich but there are a larger number who are or will be under financial stress in their retirement," Vaughan says.

Less than half of those surveyed (46%) say they are well set up for retirement. This ranges from 37% of 50-54 year olds to 70% of 65-69 year olds. Wellingtonians are dragging the chain on retirement readiness compared to the rest of the country with just 35% of them saying they're well set.

"Even for the 65-69 year olds - the most well set up of all age groups - that still leaves almost a third that are already struggling in retirement or soon will be. That's pretty alarming."

Vaughan says the research is revealing in terms of baby boomers' attitudes to finances and planning for their imminent retirement.

But just 44% have actually calculated how much money they will need for their retirement.

"It's a concern that the majority don't have much idea how much they will need for retirement and what's more, 41% admit they have little or no retirement savings and will rely on government superannuation," Vaughan says. "Almost half (49%) concede they will have to make significant spending cuts when they stop work which is no good for them or the country's economy."

A significant proportion (42%) will rely on equity from their property to help them through retirement while 58% say they have a range of investments.

BNZ spokesperson Craig Herbison said the research echoed the sentiment of the bank's own research, which sought to investigate if people were taking advantage of the lowest interest rates in a generation, to pay off their mortgages faster.

"What we found is that people are overly optimistic about when they'll have their mortgage paid off. More than seven out of ten New Zealanders with a home loan expect to have it paid off by the traditional retirement age of 65. However, the reality is that far fewer will achieve this. Almost one in three will be older than 65 when they pay their home loan off."

"Most mortgage payments are around $2,000 a month. Not having that bill to pay would be liberating in retirement and allow people who have worked hard all their lives have the retirement they deserve," Herbison says.

But mortgage or no mortgage, the Colmar Brunton research reveals retirement is a long way off for many baby boomers with 59% saying they will keep working past retirement age and half of those now aged 65-69 still working.

Aucklanders (43%) are keener on early retirement than Wellingtonians (39%) or Christchurch residents (37%).